Update, Dec. 7: The street sealant work in Sun City has been hampering residential seasonal shopping traffic and local parcel deliveries.  To reduce disruptions, City crews will be finishing the roadways already started and suspending further sealing until after the first of the year. Existing work should be completed by Wednesday, December 9. (See the updated schedule … END_OF_DOCUMENT_TOKEN_TO_BE_REPLACED

This week technicians with WJE, an engineering and materials science firm, took samples of concrete from the Austin Avenue Bridges over the San Gabriel River. Using a small drilling machine, non-destructive core samples were taken from the bridge deck and the bridge support structures. Ground penetrating radar technology also is being used to determine the … END_OF_DOCUMENT_TOKEN_TO_BE_REPLACED

The Sidewalk Master Plan will receive an award from the Central Texas American Planning Association. The award for Best Long Range Plan of 2015 will be presented at the association’s annual awards event on September 26 in Bastrop. In October, the plan will be recognized during the annual conference of the American Planning Association Texas … END_OF_DOCUMENT_TOKEN_TO_BE_REPLACED 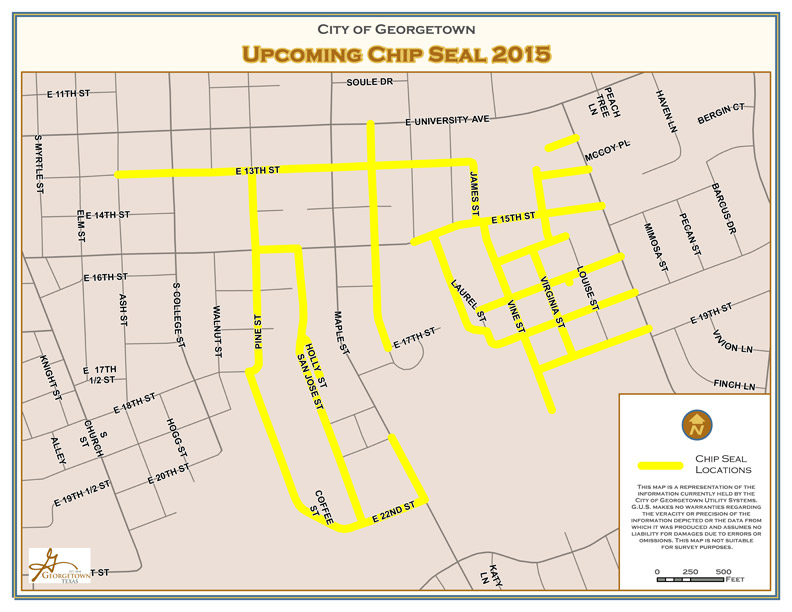 Street resurfacing with a chip seal treatment on several Georgetown roads is scheduled for August 6 – 21 in the area south of University Ave as shown in the map. Chip seal resurfacing involves applying a layer of emulsion to the roadway followed by a layer of small-sized gravel. Unless otherwise noted, the entire length … END_OF_DOCUMENT_TOKEN_TO_BE_REPLACED

The City of Georgetown is currently in the process of completing a Hazard Mitigation Plan.  Input from the community is needed for the project team to identify and analyze potential hazards affecting residents and recommend possible actions to reduce their impact. Hazards can include droughts, floods, hurricanes, tornadoes, wildfires, and other major disasters. A public … END_OF_DOCUMENT_TOKEN_TO_BE_REPLACED

Update: Today the FAA has delayed tower closures until June 15th.  So the City contracts and funding of the tower will not begin until June 16th if TxDOT allows the grant to be extended to that date. The Georgetown city council voted this morning to accept an emergency short-term grant from the Texas Department of Transportation … END_OF_DOCUMENT_TOKEN_TO_BE_REPLACED