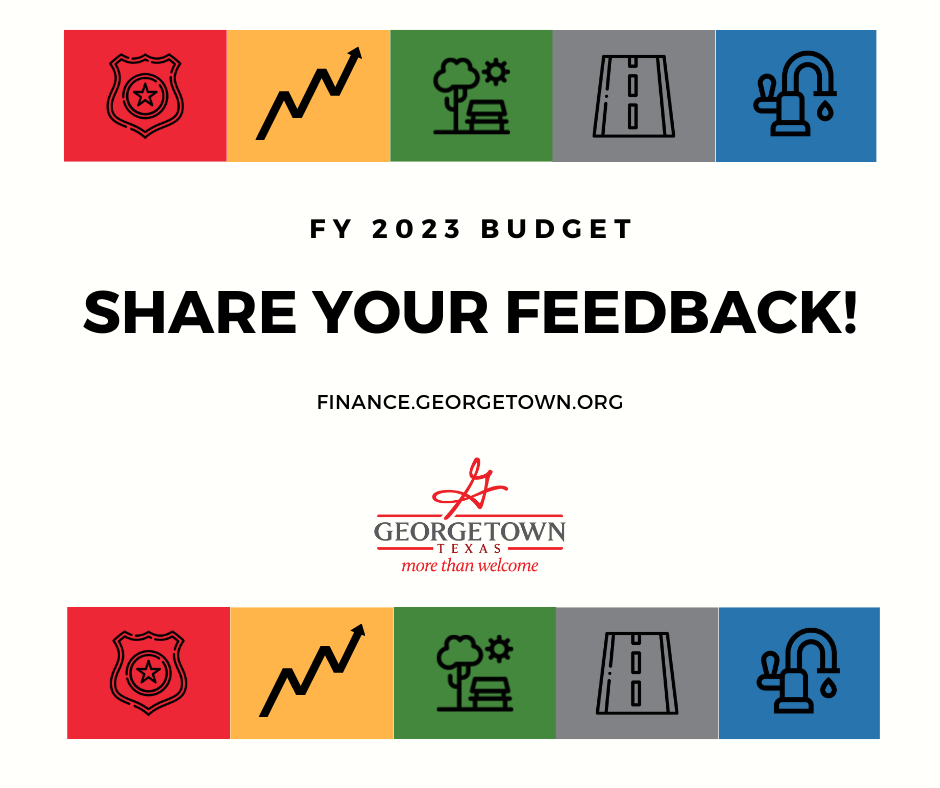 The City of Georgetown is asking the public to share comments on the proposed Fiscal Year 2023 budget through an online comment box, which will be up through Aug. 21. Members of the public also can attend any of the public hearings through the budget adoption process. Public comments and feedback will be provided to City Council for its Aug. 23 meeting, during which the council is scheduled to hold public hearings and first readings of both the tax rate and the budget.

“Having community feedback in the budget process is important,” City Manager David Morgan said. “I hope residents will check out our website to learn more and share their feedback, so we can fund programs and services that meet their needs and priorities.”

The City of Georgetown budget affects every resident in the city. How the City allocates taxpayer dollars and monthly costs as utility customers determines the level of service customers get in return for City functions, such as providing electricity, drinking water, resources to respond to emergencies, well-maintained streets, a world-class library, and accessible trails.

The proposed budget totals $722 million and decreases the City’s property tax rate by 2.7 cents (from 40.1 cents per $100 valuation to 37.4 cents). The proposed rate is below the voter-approval rate set by the state and can only increase 3.5 percent on the operations and maintenance portion of the tax rate.

This is the third year in a row the City has proposed reducing the property tax rate, maintaining the City’s rate as among the lowest of all cities in the Austin area with a population greater than 20,000. Council also recently voted to increase the homestead exemption to the greater of $5,000 or 5 percent. By lowering the rate to 37.4 cents per $100 of valuation and accounting for the increase in homestead exemption, the average property tax bill is expected to increase by $56.

“The U.S. Census named Georgetown the fastest-growing city in the country this past year,” Morgan said. “With that growth comes increasing demands and expectations for our services and staff. Our primary focus for next year’s budget is maintaining those service levels while responding to that record-setting growth, as well as nationwide economic pressures. Next year’s proposed budget continues our usual practices of budgeting conservatively and taking steps to reduce the burden on taxpayers where possible.”

Major themes of the proposed budget are maintaining service levels in the face of record-setting growth and responding to nationwide economic pressure while executing studies and projects initiated this year, addressing staff workload pressures, improving risk management practices, and responding to a tight labor market through retention and attraction efforts. Adequately funding those priorities—particularly building the infrastructure needed to keep pace with growth, responding to development pressures, and retaining and recruiting high-caliber employees—contributed to the proposed budget being $239.5 million more than the current fiscal year’s original adopted budget of $483 million.

For more information about the annual budget process and details and documents about the proposed FY2023 budget, visit finance.georgetown.org.

Aug. 23: Public hearings and first reading of both the tax rate and the budget

Sept. 13: Second reading and final adoption of the tax rate and budget