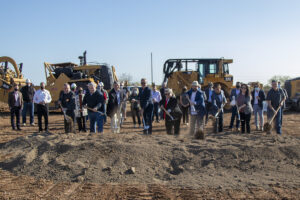 Titan Development Real Estate and the City of Georgetown broke ground on the first phase of the 146-acre NorthPark35 Class A industrial development at I-35 and SH 130 today.

Phase one of the project includes two buildings totaling more than 330,000 square feet, as well as the extension of Aviation Drive to intersect with SH 130 and I-35. One building will be partially occupied by Georgetown-based Texas Speed and Performance, while the remaining space will be available for future industrial users. The park is designed and master-planned to accommodate users in need of 25,000-250,000 square feet of space.

“Georgetown is poised to become an important new business center along the I-35 corridor,” said Joe Iannacone, vice president of development for Titan Development. “With such direct access to major markets such as Austin, Dallas, and San Antonio, we’ve already had exceptional interest from end-users in the e-commerce, logistics, pharmaceuticals, light manufacturing, and agriculture industries. This new park is destined to become a hub of innovation for Georgetown and beyond.”

The project also includes the extension and expansion of Aviation Drive, as well as electric and waterline infrastructure extensions.

“Here is another great example of how this city is a wonderful place to do business,” Mayor Dale Ross said. “This project creates an opportunity for our local companies to expand and offer others a place to relocate or open. This project will help draw new jobs to our community, which is something our residents have asked for, and something that helps make Georgetown the best community for businesses and residents.”

Reimbursement would be made in three installments if certain terms are met, including construction of the roadway within 24 months, an investment of a minimum of $15 million in capital expenditures, and the developers adhering to approved design and use standards for the construction of the industrial park.

The new road and the utility line extensions will serve future phases of the NorthPark35 industrial business park as well as other undeveloped properties along Aviation Drive.