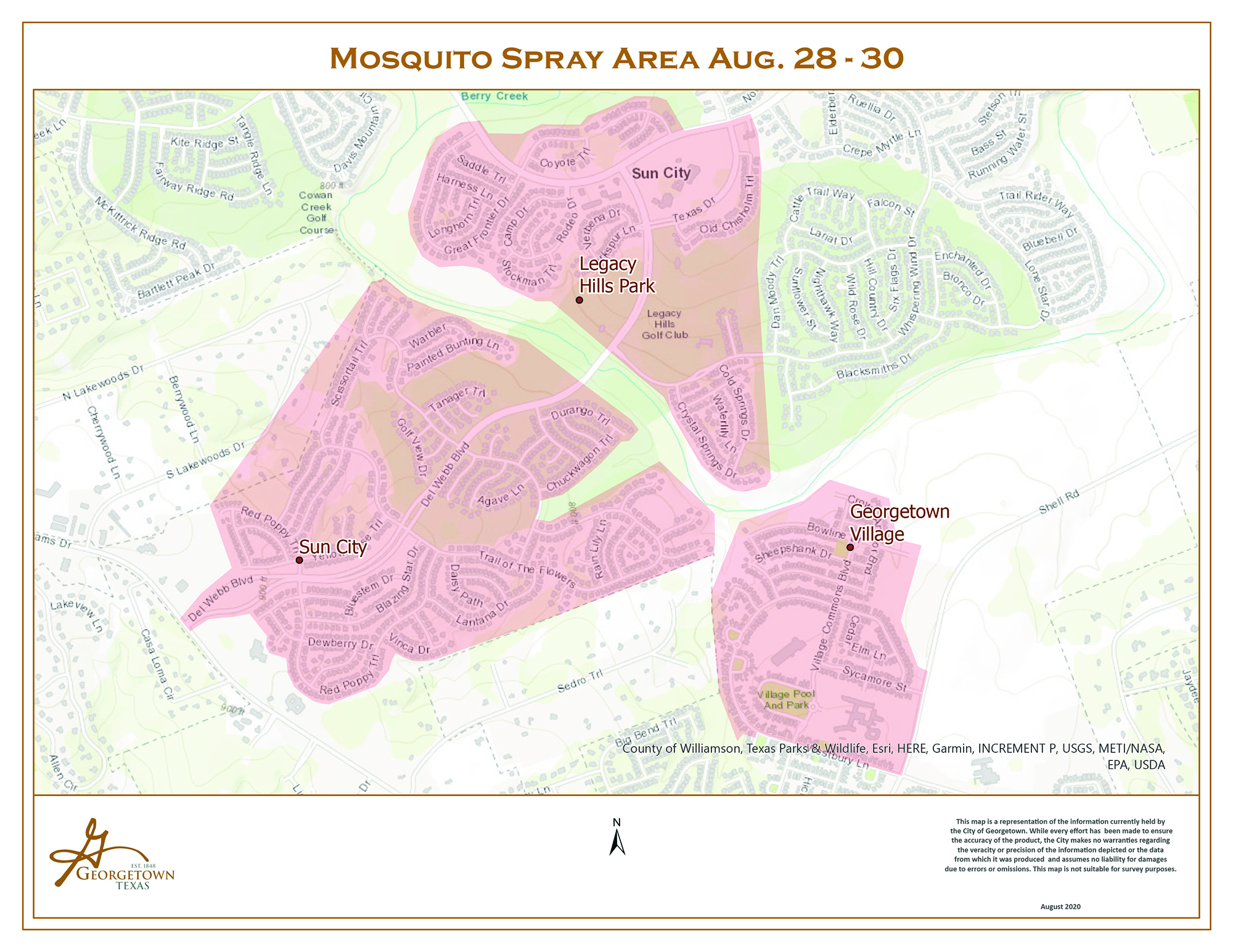 Three mosquito trap samples collected in Georgetown this week have tested positive for West Nile virus. The trap locations include two in Sun City on Yellow Rose Trail and at Legacy Hills Park and one in Georgetown Village at Creekside Park. This is the third West Nile virus-positive sample for the trap on Yellow Rose Trail and the second positive test for the trap located at Creekside Park.

The positive sample results were received by the Williamson County and Cities Health District yesterday afternoon. No other samples were found to be positive from routine trapping this week as part of the WCCHD Integrated Vector Management program.

West Nile Virus is the most common mosquito-borne disease in the United States. In 2020, there have been 11 mosquito trap pools that returned positive for West Nile Virus in Williamson County.

“The most important way to prevent West Nile Virus is to reduce the number of mosquitoes. WCCHD strongly encourages everyone to remain vigilant about protecting themselves from mosquito bites and preventing mosquito breeding on their property by using an EPA-approved repellent every time they are outdoors, or dressing in long sleeves and pants, draining standing water, even in the smallest amount, treating or changing water in bird feeders or fountains weekly,” said Jason Fritz, WCCHD Integrated Vector Management Program lead.

The City is following the Health District’s best practices for Integrated Mosquito Management which, at this time, calls for truck-mounted spraying, along with enhanced monitoring and testing and increased public outreach and education. Enhanced mosquito control efforts will also continue with the treatment of standing water with larvicide.

The City is implementing insecticide spraying in the vicinity of the positive samples for the next three nights Aug. 28-30. A City vehicle will use a pyrethrin-based insecticide along the street right-of-way and in public parks, weather permitting. Pyrethrin is a chemical that can be found in chrysanthemums.

Although the mosquito control product poses no significant health risk, if possible, people and pets may want to stay indoors during spraying.

The City and the Health District are encouraging everyone to be especially vigilant about protecting themselves from mosquito bites when outdoors, and preventing mosquito breeding on their personal property.

While many people who become infected with West Nile Virus have no symptoms, the symptoms of infection may include fever, headache, and body aches, a skin rash on the trunk of the body, and swollen lymph nodes. Those age 50 and older and/or with compromised immune systems are at a higher risk for severe symptoms, which may include stiffness, disorientation, coma, tremors, vision loss, paralysis, and in rare cases, death.

Mosquitoes are present in Central Texas year-round, but the population is largest and most active from May through November. During this period, WCCHD monitors the mosquito population and tests for mosquito-borne viruses.

Eliminating places where mosquitoes can breed and reducing the chances of mosquito bites are the most effective lines of defense against exposure to West Nile Virus. As part of its Fight the Bite campaign the Health District recommends the 3 Ds of mosquito safety:

For more information, go to the WCCHD website at www.wcchd.org or visit the Texas Department of State Health Services West Nile website at txwestnile.org.