City of Georgetown Texas > Archived > Air Force Thunderbirds to fly over Georgetown on Wednesday
May 12, 2020 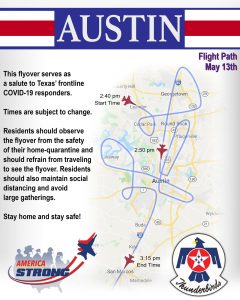 A formation of six F-16 Fighting Falcons will fly over Austin and San Antonio as a salute to health care workers, first responders, military, and other essential personnel while providing Americans with a symbol of hope during this pandemic.

The U.S. Air Force Air Demonstration Squadron–the Thunderbirds—plan to fly over Central Texas on Wednesday, May 13, beginning at 2:40 p.m. The flight will last approximately 25 minutes.

The flyover will start over Leander and head to Georgetown before flying south along the I-35 corridor.

Residents along the flight path can expect a few moments of jet noise as the aircraft pass overhead, along with the sight of six aircrafts flying in formation.

Residents will be able to see the flyover from the safety of their homes and are encouraged to maintain social distancing guidelines during the event. The community is also asked to refrain from traveling to landmarks, hospitals and gathering in large groups to view the flyover.

Forecasted inclement weather in San Antonio and Austin could delay tomorrow’s flyover times or postpone the flyover all together. Follow the Thunderbirds on Social media at facebook.com/USAFThunderbirds and twitter.com/AFThunderbirds for updates.