Update: This is a news post from February 2019. The City electric utility discontinued claiming 100 percent renewable status later in 2019 after selling renewable energy credits to generate revenue for the utility.

Reports by a local newspaper and an anti-renewable energy advocacy organization have attempted to question Georgetown’s status as an electric utility that uses 100 percent renewable energy.

The Electric Reliability Council of Texas manages the statewide electric grid. ERCOT also tracks renewable energy production for the City. The City is able to determine its energy consumption based on data from customer meters. When determining what percent of an electric utility’s energy portfolio is renewable, the energy produced is compared to the energy consumed. For example, in 2018:

The City has never claimed that the electrons produced by its energy contracts are the same electrons consumed in Georgetown. In fact, a commentary published by the Austin American-Statesman on Aug. 11 states, “[t]he city did not set-out to influence other energy providers or shakeup the state grid. We know that Texas is reliant on traditional sources of energy. We know it is impossible to track an electron produced in West Texas all the way to Georgetown. However, we also know that state attributes all of wind farm and solar farm production with Georgetown.”

Contrary to some reports, the City does not have a policy to be 100 percent renewable in its energy supply. In 2014 and 2015, the City selected wind and solar energy providers because of the long-term cost stability and reduced regulatory risk. The City’s goal is to have 30 percent of its energy from renewables by 2030.

ERCOT manages the flow of electric power for 90 percent of the state’s electric load. This interconnected systems means all sources of energy enter into and are consumed off the statewide grid.

Georgetown is reliant upon energy from the grid to ensure customers receive reliable energy. As a member of ERCOT, the City of Georgetown is obligated to purchase, place, and ultimately provide energy to customers using the ERCOT-managed grid.

The City is under contract to purchase energy from four different providers. The two largest energy providers are Spinning Spur 3, a wind farm near Amarillo, and Buckthorn, a solar farm near Fort Stockton.

The final energy contract is with Mercuria for natural gas-based energy. This contract was initiated and is a short-term power supply, set to expire in 2022.

The energy production for each of these contracts, as well as Georgetown’s electric consumption, is included below. 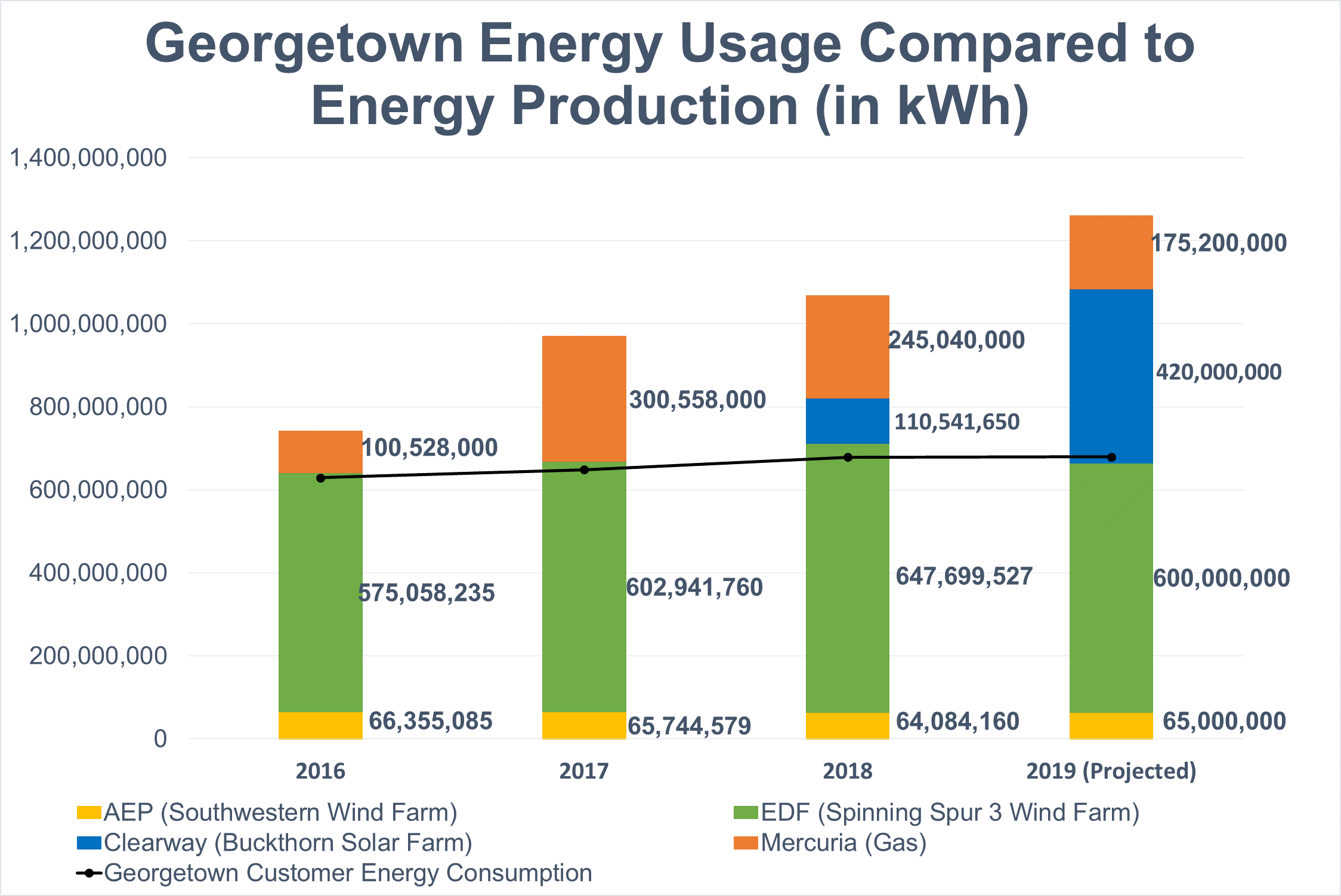