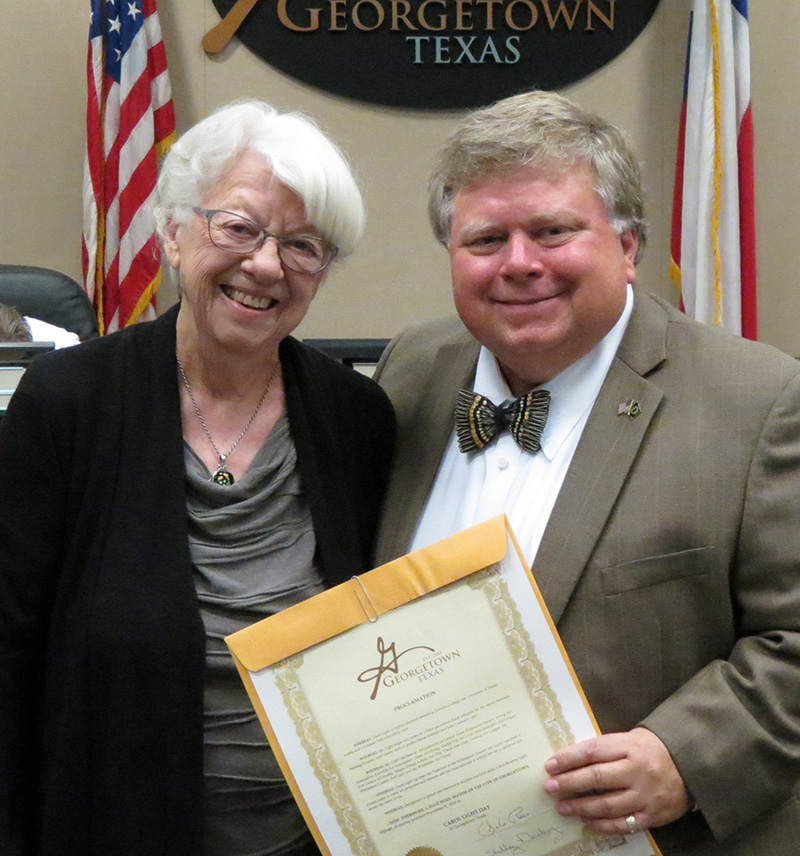 Carol Light’s contributions to arts and culture in Georgetown were recognized earlier this month in a proclamation at a City Council meeting that acknowledged her career and lifetime of service to the arts.

Mayor Dale Ross remarked on Light’s contribution as an artist at the meeting. “Carol Light is a very talented artist and a wonderful representative for Georgetown’s strong arts community. She has helped to build the art community here over the decades through her teaching and encouragement of other artists, and she has enriched life in Georgetown by sharing the inspiring body of work she has created in her 45+ years in Georgetown as a professional artist. She is a person who inspires creativity and joy through the arts,” said Mayor Ross.

In 2015, Light was selected as one of just a handful of local artists commissioned to create artwork to be exhibited in the Sheraton Georgetown Hotel and Conference Center, which opened in July. Light collaborated with Sue Bishop Spahn on a 14-foot-long painting called “Grazing the Fault” that hangs now behind the reception desk in the upscale hotel.

Light’s art has been exhibited internationally, and has won awards in a number of juried shows. Her work was carried by Spicewood Gallery and Design Studio in Austin, and by Hill Design + Gallery in Georgetown. She works primarily in watercolor and mixed media.

Light, 86, says, “I am still making art, mostly mixed media lately. I work on paper and canvas, and I love handmade papers and collage. It’s so much fun to be in the creative process—it’s a different world. It transports you like books and reading do, but putting color down on paper is a special joy for me.”

Light is a third-generation floral designer who worked as a young woman in Austin for the family business, Belding Flowers, which served the needs of customers like Lyndon Baines Johnson and John Connally. She worked as a floral designer until 1976. When asked how she was first inspired to take up art, she said, “We were not taught much art in high school, but my parents owned the retail flower shop in the Driskill Hotel in Austin, and you learn a lot of design in the floral industry.” 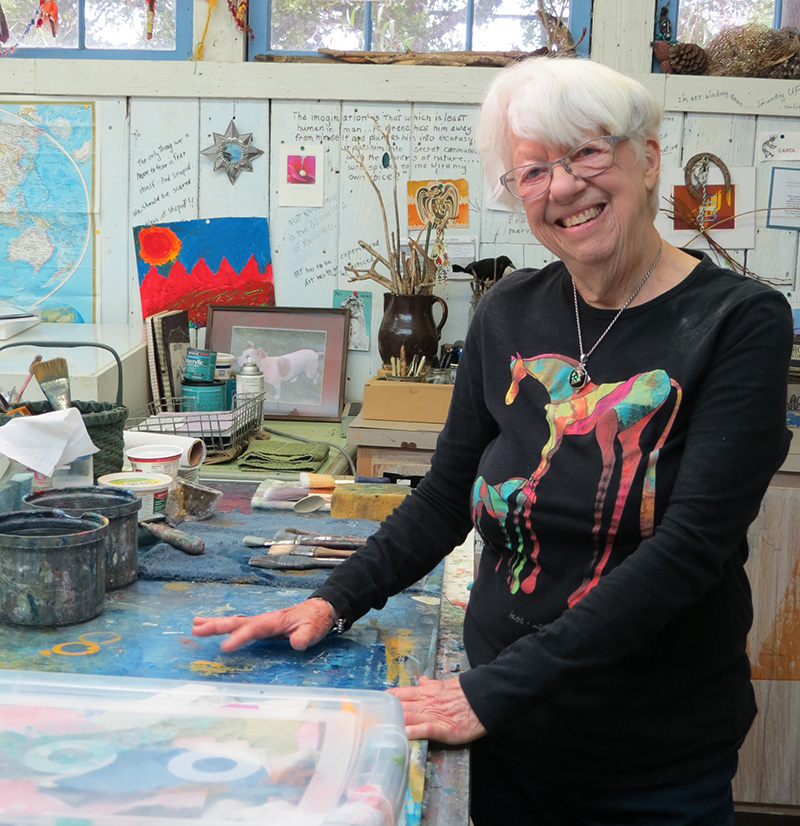 In addition to that on-the-job training, Light attended Tarleton College in Stephenville, Texas and also The University of Texas at Austin. She left college in order to study art more intensively, and she took summer courses at Louisiana Tech University in Rustin, Louisiana.

Light and her husband and sons moved to Georgetown in 1969, into a house she still occupies. She works in a studio on the property that was rebuilt from the remains of a barn with a sweeping view of the countryside.

In 1980, she became an art instructor and she continued to teach art until 1996. “Most artists,” she said, “have to supplement their income. Artists are trying to say something in a nonverbal way….while you are practicing and working on those creative goals, you have to support yourself, so I took up teaching—then I found out what a joy it was. I ended up travelling and teaching all over the state. It was so inspiring to teach other artists and see them develop.”

In June, her farm was the site for a “Curated Picnic” for creatives organized by Light with graphic designer and artist Nick Ramos, owner of Georgetown graphic design firm Graphismo. Ramos says, “Carol is a pioneer, an inspiration, a true guiding light. The never-ending desire to learn keeps her young. She has mentored endless numbers of artists, citizens, and children in our community. She was there at the beginning of the Williamson County Art Guild. Her words, kindness, talent, and smile are a source of energy that will inspire anyone that crosses her path.”

In addition to her teaching, Light has worked in other ways to foster local creativity. She has a history of involvement in local arts groups, having served as president of the Williamson County Art Guild and judging art exhibits, as well, including the 2012 Art Hop, a statewide competitive exhibit hosted by the Georgetown Art Center.