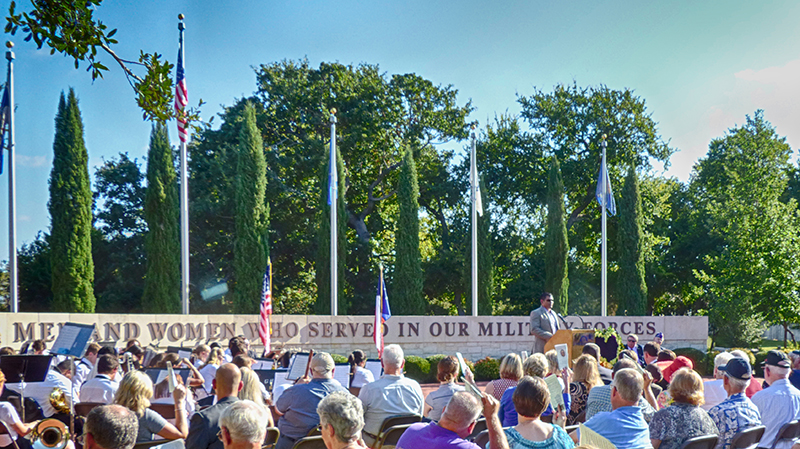 The annual Veterans Day Ceremony in Georgetown is at 11 a.m. on Friday, November 11 at the Georgetown-Williamson County Veterans Memorial Plaza.  All veterans and their families attending will be recognized and several veterans will participate in the program. The Georgetown High School band, orchestra, and choir will provide music beginning at 10:45 a.m.

The guest speaker is Major General Douglas Chalmers, an officer in the British Army who is currently deputy commanding general for support of III Corps and Fort Hood. Chalmers was born in Belfast and served in the Royal Irish Rangers early in his military career. His service includes command positions in Northern Ireland, Kosovo, and Afghanistan, as well as in Washington where he served the U.S. Joint Chiefs of Staff.

At the ceremony, Colonel James Chalaire and Commander Bob Kelety will be honored by the dedication of a tree and plaque behind the Memorial Wall. Chalaire is a retired officer in the U.S. Air Force and Kelety is a retired officer in the U.S. Navy. During the ceremony, wreaths will be placed at the Memorial Wall in honor of all those who have served in the armed forces and in memory of the 175 persons from Williamson County who lost their lives in combat.

Parking is available at the Sun City Social Center at 2 Texas Drive and across the street at the Activities Center at 1 Texas Drive. Seven-hundred folding chairs will be placed at the Memorial for event seating. Guests also may bring a folding chair and sit at the plaza under the trees. The Sun City Community Association will serve refreshments on the Social Center patio after the ceremony. The event is free and open to the public.

Rain location: In case of rain, the event will be held in the ballroom at the Sun City Social Center, 2 Texas Drive, Georgetown, TX, 78633.