As the fastest-growing city in the nation above 50,000 residents, the City of Georgetown is developing a budget for 2017 that responds to the demands of growth while keeping the property tax rate the second lowest in Central Texas. Hearings and City Council approval of the budget are scheduled for August and September.

The proposed budget includes a lower property tax rate of 42.4 cents, which is 1 cent lower than last year. Major parks and road projects approved by the voters are included in the budget, but due to increases in property values, the tax rate is reduced. Additionally, sales tax revenues are projected to grow 3.7 percent next year, which also helps to offset the property tax impact. City property taxes for the average home in Georgetown are projected to increase by $56.

Highlights of the 2017 budget include new parks and road projects, utility projects, and services to meet the demands of growth.

Southwest Bypass: This new arterial to be completed in 2018 will connect State Highway 29 with Leander Road on the west side of town. (Another segment will be built by Williamson County to connect Leander Road to I-35). The budget includes $10 million for this project that was approved by voters in the 2015 transportation bond.

Farm to Market Road 1460: This four-lane road that connects the medical and higher education corridor in north Round Rock with Georgetown started last year and continues in the current budget year. Funding includes federal, state, and local revenues.

Garey Park: Construction starts this fall on Garey Park, a 525-acre ranch on west Leander Road that is set to open as a park next year. Features of this park, a generous gift from Jack and Cammy Garey, will include hiking trails, camping areas, an equestrian center, and an event center. The budget includes $5.5 million for this new park, authorized by voters in 2008. 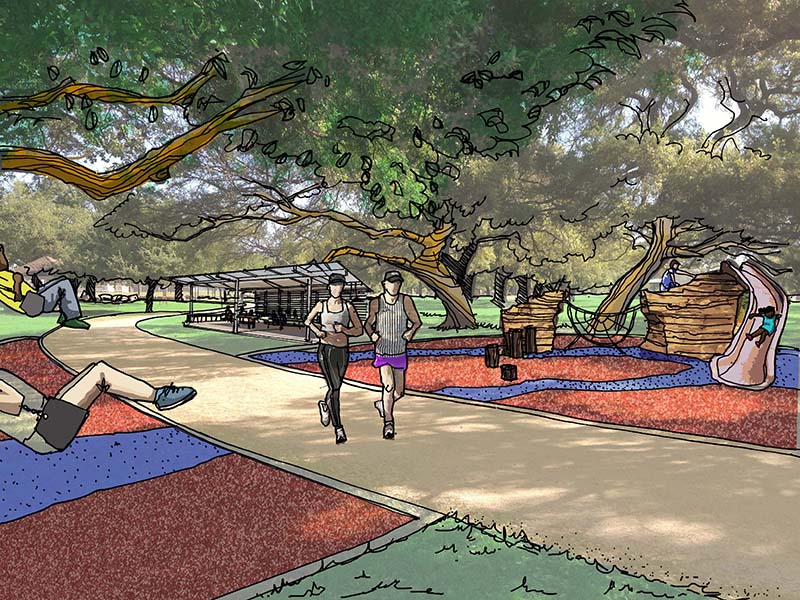 San Gabriel Park: The first phase of renovations to San Gabriel Park, a project approved by voters in 2008, is funded at $1 million in the current budget (see image at right). New pavilions and playgrounds along the San Gabriel River are included in phase 1.

Public Safety: Responding to growth in calls for service, three firefighter-paramedics and two emergency communication operators are included in the budget. In partnership with Georgetown ISD, a school resource officer will be added to provide an officer at each middle school.

Sidewalks: The budget includes $2.2 million in sidewalks and ADA ramps at intersections to increase pedestrian mobility and safety. This is the first of a multi-year program approved by voters in 2015.

Street Maintenance: Projects include segments of Sixth, Seventh, 10th, 11th, and 17th streets for rehabilitation, as well as sealant and asphalt overlay on many neighborhood streets. The total budget is $3.8 million for 2017, funded by the street maintenance sales tax and general fund revenues.

Public hearings on proposed tax rate and budget are scheduled for August 9 and August 16. The first reading of the budget and tax ordinances is on August 23 and the second reading is on September 13. The hearings and ordinance readings are at City Council meetings that start at 6 p.m. at City Council Chambers, 101 E. Seventh Street.

To see the proposed 2017 budget as well as summary documents, visit the City of Georgetown website at georgetown.org.