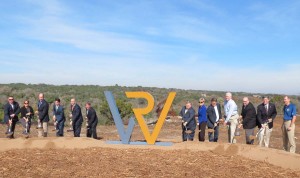 The 755-acre Wolf Ranch master-planned residential project was officially launched last Thursday in Georgetown. Hillwood Communities, the Dallas-based residential developer building the project, hosted a groundbreaking at a site on Wolf Ranch Parkway that will be the community center and swimming pool for the new development.

Wolf Ranch will include 1,600 single-family homes, 900 multifamily units, neighborhood retail, and 140 acres of green space with parks and trails.

Site work has begun for phase 1 of the project that includes 80 acres and 214 home sites along Wolf Ranch Parkway. Residents are expected to move into the first homes in 2017. Hillwood Communities expects that homes at Wolf Ranch will be priced in a range from $275,000 to $500,000. 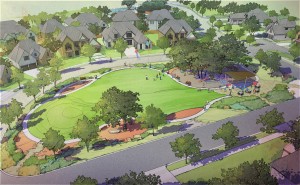 The groundbreaking site on a hill overlooked rolling ranchland covered with live oak trees and prickly pear cactus. “This land is as beautiful as any we have ever developed,” said Brian Carlock, senior vice president for Hillwood Communities. (A rendering of one of the parks in the development is pictured at right.)

Future phases of the Wolf Ranch community include areas west of Wolf Ranch Parkway and areas south of University Avenue to the east and to the west of D.B. Wood Road.

The land for the residential project was purchased from the Wolf family in 2014. Wolf family land includes 755 acres in the Hillwood project as well as the property for the Wolf Ranch retail center at Texas 29 and Interstate 35. Wolf Ranch Town Center, which opened in 2005, is owned by Simon Property Group. 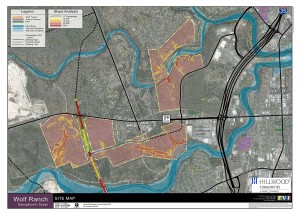 Land for the Wolf Ranch Hillwood development has been annexed into Georgetown city limits. (A map of the entire Wolf Ranch master-planned community is shown at right.)

The project will be funded in part through a municipal utility district located within the city limits.

Hillwood Communities, owned by Ross Perot, Jr., has developed 80 master-planned communities in the U.S., including the 18,000-acre AllianceTexas near Fort Worth and the 4,474-acre AllianceFlorida.