Joseph Magnano has his work cut out for him. He will spend much of July attending to the back of the oldest building on the historic downtown square, 711 S. Main Street. He began work in June beautifying this uninspiring 23 x 15 foot wall, and has already made strides on the stucco surface, working under a commission from the City’s Arts & Culture Board. 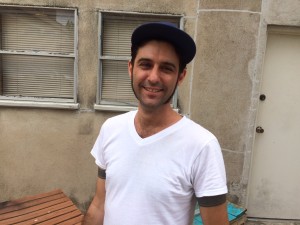 Magnano, pictured at right at the mural site, is a Waco-based fine artist who studied at the San Francisco Art Institute and the Artist Students League of New York City. The mural will provide a piece of public art of interest to residents and visitors to the downtown. Magnano’s mural will have a nature-and-wildlife theme with a bit of Texas mythology thrown in for fun, and will be “vibrant with color, full of life, inspirational to all ages; fun and playful.”

Magnano’s proposal said, “This mural is designed to … bring back memory of the simple beauty and expressions that are provided by nature and its wildlife. Nature tells its own story when it looks at us. It’s important to recognize how nature observes us as settlers and how that is ingrained into culture, heritage, preservation; which is relevant to Georgetown’s acknowledged agrarian beginnings.”

Eric Lashley, Georgetown Public Library Director and staff liaison to the Arts & Culture Board, said, “I am very excited about this project.  I hope it inspires other building owners to consider allowing the Arts and Culture Board to add additional murals to the downtown in the future.”

The City of Georgetown Arts and Culture Board issued the call for artist proposals for a mural to be located on the rear wall of 711 S. Main Street earlier this year. Nine proposals were submitted, and at its May meeting, with design approval from the building’s owner, the board selected Magnano’s submission. The target date for completion of the mural is August 1.