A new neighborhood splash pad opens at San Jose Park on Thursday, July 2. The Georgetown Parks and Recreation Department will hold a grand opening for the new splash pad at 10 a.m. on July 2 at San Jose Park, 1707 San Jose Street. The park is near the intersection of Maple and 15th streets. 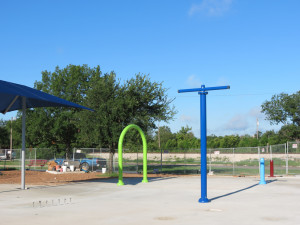 A motion sensor activates the spray features to run for several minutes before turning off automatically. The play area has a shade awning on one side.

The splash pad will use recirculated water that is filtered, chlorinated, and stored in a tank below the surface. Parks staff will check chlorine levels daily.

The splash pad was built by Progressive Commercial Aquatics at a cost of $300,000.

The new splash pad was added to San Jose Park in a second phase of recent renovations. Last year the park was improved with the addition of new playground equipment, a parking area, and restrooms.

The splash pad will operate each year from April 1 through September 30. Daily hours during that season are 9 a.m. to 8 p.m.