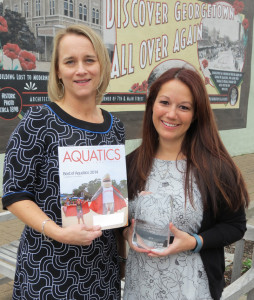 The aquatics program for Georgetown Parks and Recreation recently received top honors for its lifeguard training program. The program won Aquatics International Best of Aquatics for Lifeguard Training at the Association of Aquatics Professionals annual conference in February.

Stephanie Darimont, aquatics supervisor for Parks and Recreation, received the award for Georgetown at the conference. The award recognized Georgetown’s program for “imagination, expertise, dedication, and forward-thinking.” Aquatics professionals from across the country and from other countries attended the conference.

As a result of the award, Georgetown’s aquatics program was featured in Aquatics International magazine, a trade publication with more than 90,000 subscribers.

Pictured in the photo (left to right) are Kimberly Garrett, parks and recreation director, and Stephanie Darimont, aquatics supervisor.