A new group of volunteers is helping to increase the outreach and capacity of the Georgetown Police Department. Sixteen Citizens on Patrol volunteers are driving the streets of Georgetown to “observe and report” and assist in other duties of the department.

Volunteers have completed four weeks of training, which includes learning from officers in each area of the police department such as patrol, criminal investigations, and community resources. Most of the volunteers also are graduates of the 10-week Citizens Police Academy in which they get an education in all aspects of the department.

The COPs volunteers will use a vehicle to conduct close patrols in neighborhoods, observe areas in response to complaints, and work at community events. The volunteers also will serve as eyes and ears for code enforcement, which is part of the police department.

Another duty involves placing four radar boxes at various locations to track speeds on city streets. The radar boxes collect data that is used to adjust speed limits, but is not used to issue citations.

Lt. Jim Seals says that using trained volunteers to serve in some of these non-emergency roles allows sworn officers to devote more time to respond to emergencies, solve crimes, participate in training, and interact with the community. 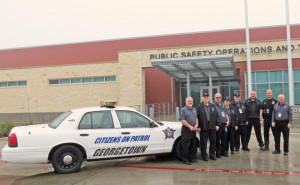 The Citizens on Patrol vehicle has a radio that allows volunteers to communicate with 911 emergency communications operators in order to request an officer or report information. The volunteers will not carry weapons. Dennis Barbeau, who is the volunteer director of the program, says they are trained to be non-confrontational and avoid situations that could put them in danger.

The Citizens on Patrol volunteers are among more than 160 total volunteers who assist the Police Department in many ways, including the Blue Santa program, Park Rangers program, at the Animal Shelter, and in other areas.

The sixteen volunteers have been logging 100 hours per week for the past several weeks. They provided security for the new Public Safety Operations and Training Center while contractors worked to finish the facility and while police employees moved in.

Lt. Jim Seals, who leads the community resources program for the department, says that they are not currently recruiting any additional volunteers for the Citizens on Patrol program. Lt. Seals does expect that the program will expand in the future as the demands of the department grow. 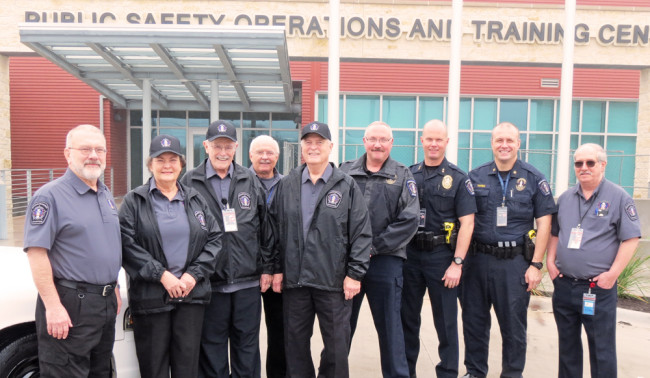