A new 90-acre park on the west side of Georgetown is being planned and the City of Georgetown wants your input. What would you like to see in this park? Ball fields? Hiking trails? Natural preserves? We’d like to know what is important to you. 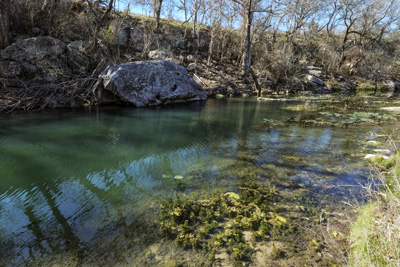 The City of Georgetown Parks and Recreation Department is holding a public meeting at 6 p.m. on January 22 to get your input. The meeting will be at the Community Center at 445 E. Morrow Street in San Gabriel Park.

The City owns 90 acres of undeveloped parkland that will be used for the new westside park. The property is on the northwest side of Shell Road near Shell Spur. Berry Creek runs through the parkland and limestone cliffs border the creek’s edge.

The City purchased the 90-acre property in 2013 for $1.35 million in order to develop the land into a park on the west side of the city. Revenue from the 2008 voter-approved parks bonds was used to purchase the land.

Public input from the January 22 meeting will be used in the creation of a master plan for the future park. The westside park could include uses such as fields for soccer and baseball, playgrounds, nature trails, picnic pavilions, and natural areas.

The Parks and Recreation Department will incorporate public input in the design of a master plan for the westside park. The master plan process is expected to take approximately six months. The construction timeline for the park will depend on utility and development projects in the area, as well as future funding.

For details about plans for the future westside park, contact Eric Nuner, assistant director of parks and recreation at (512) 930-3525 or eric.nuner@georgetown.org.