Three Georgetown elementary students were honored this week for their winning essays on the topic, “What a purple heart means to me?” The students were recognized at the Georgetown City Council meeting Tuesday evening.

The Purple Heart essay contest was sponsored by the City of Georgetown and the Texas Capital Chapter 1919 of the Military Order of the Purple Heart, a Central Texas service organization of Purple Heart veterans. 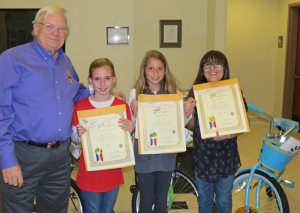 Pictured in the photo (left to right) are Ted Acheson with Chapter 1919 of the Military Order of the Purple Heart, Mary Mac Decker, Brooklynn Petty, and Alejandra Almendarez. (Click on the photo to see a larger version.)

In addition to a cash prize, each of the three students received a new bicycle. The new bicycles were provided by an anonymous donor.

The Purple Heart is awarded to any member of the U.S. military who is wounded or killed in combat. Georgetown became the first city in Texas to be officially designated a Purple Heart City when the Georgetown City Council approved a resolution on September 10, 2013.