Firefighter Craig Owen was recognized at the Georgetown city council meeting last week for his role as a liaison to families of two volunteer firefighters who were killed in the April 17 explosion in West, Texas. Owen, who is a driver/engineer with the Georgetown Fire Department, also was honored for coordinating round-the-clock honor guard teams from across the U.S. for all the firefighters who were killed in the incident. 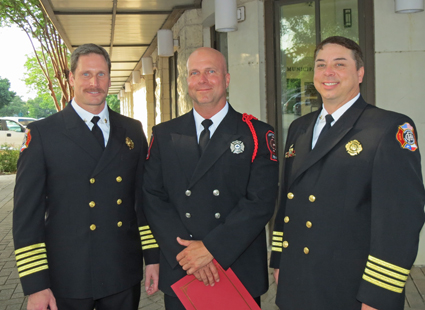 As a member of the Texas Line of Duty Task Force, Owen served in these roles in West for 17 days from the day after the explosion until the last burial of the first responders who died in the incident. (Pictured in the photo, from left, are Fire Chief John Sullivan, Driver/Engineer Craig Owen, and Assistant Fire Chief Clay Shell.)

Charlotte Chism Waldrum, president-elect of the Texas Funeral Directors Association, writes in a letter to the Fire Department, “I witnessed Craig spend countless hours, making sure his fallen brothers received the honor, respect and dignity they deserved. …I realize how proud your department must be to call Craig Owen one of your brothers. The job he did in West came, obviously, from his heart…”

At the city council meeting, Fire Chief John Sullivan presented a letter of commendation from the Georgetown Fire Department to Owen. “Craig did an outstanding job providing for all the families of the West tragedy,” said Sullivan. “He put his personal life on hold, and spent two weeks in West. …We are lucky to have Craig Owen working for the Georgetown Fire Department.”