Several Georgetown firefighters were awarded the green cross this week for their efforts to extract two injured drivers from their vehicles after a wreck on Texas 195. The two-vehicle head-on collision happened on the morning of March 21. The green cross is an award for firefighters involved in a vehicle extrication or rescue. Fire Chief John Sullivan presented the awards.

In the March incident, two off-duty firefighters from Fort Hood were the first on the scene. They began to assist and let 9-1-1 operators know that two people were pinned in their vehicles, which were about 75 yards apart. Georgetown firefighters responded and worked as a team to use jaws-of-life tools to open the doors on each vehicle and gain access to each driver. Both patients were successfully removed from their vehicles within 30 minutes and transported by Williamson County EMS to local hospitals. The two persons injured in the wreck have since been released from the hospital and are recovering.

Seven Georgetown firefighters were given the green cross at the Georgetown City council meeting this week. Four Williamson County EMS medics and an off-duty Fort Hood firefighter were presented with letters of appreciation for their actions at the meeting. 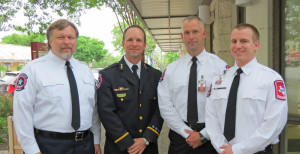