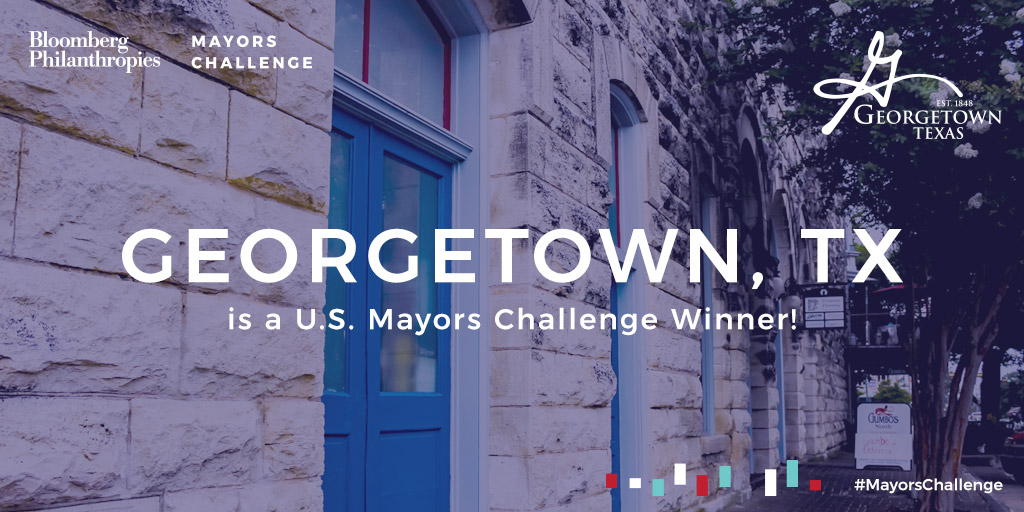 Georgetown was selected as a winner for their innovative approach to developing a “virtual power plant.”

Georgetown aims to lease rooftop space for solar panels and ground space for batteries from residential and commercial properties, offsetting the future need to purchase additional power from outside sources to meet growing peak power demand in this completely renewable energy-powered city.

While Georgetown is the first and largest city in Texas to secure 100 percent of its purchased power from renewable sources, there are cost uncertainty and reliability concerns related to transporting that energy over long distances. This plan will help shore up some of those uncertainties.

“Last year, the Georgetown City Council adopted a new vision statement: Georgetown: A caring community honoring our past and innovating for the future. Like all cities, we know in this radically changing world we need to be agile and innovative to remain sustainable, competitive, and resilient,” Georgetown Mayor Dale Ross said. “Bloomberg’s iterative approach helped us engage with the public in a way that dramatically improved our idea. With Bloomberg’s support, we’ve developed a model with greater community support and better financial viability. We look forward to making the ‘virtual power plant’ a reality.”

“Mayors across the country are tackling the big issues that Washington is ignoring. This competition is designed to help them do even more, by incentivizing and supporting big – and achievable – new ideas,” said Michael R. Bloomberg, founder of Bloomberg Philanthropies and three-term mayor of New York City. “Congratulations to all of the winning mayors, who represent cities large and small, in regions across the country. We look forward to seeing the results of their work — and to helping the ideas that prove most effective spread far and wide.”

The Mayors Challenge Selection Committee, co-chaired by Former Ambassador Caroline Kennedy and Former Xerox Chairman & CEO Ursula Burns, is comprised of distinguished policy experts, artists, academics, business executives, and social innovation leaders. The committee evaluated the cities applications based on their idea’s vision, potential for impact, implementation plan, and potential to spread to other cities to choose Georgetown as among the nine winning cities.

New to the Mayors Challenge this year was a 6-month “test and learn” phase where each of the 35 Champion Cities received up to $100,000 and technical assistance to test and build support for their ideas. Cities tested core components of their ideas with residents, improved and refined their proposals, and developed a plan for implementation and impact measurement.

“The process the City has undergone to test this idea is counterintuitive to how we typically work. Bloomberg’s iterative approach allowed us to present a rough outline of an idea and solicit public feedback that dramatically shifted the concept,” said Jack Daly, assistant to the City Manager of Georgetown. “This pivot helped us structure a new concept that had greater community support and better financial viability. Already the City is using the “test and learn” method in other programs like our ridesharing pilot and the update of our comprehensive plan.”

The U.S. Mayors Challenge builds on the success of previous Bloomberg Philanthropies-sponsored Challenges in the U.S. (2013), Europe (2014), and Latin America and the Caribbean (2016). Previous Mayors Challenge winners include São Paulo, Brazil with a program to increase farmers’ income and reduce urban sprawl; Barcelona, Spain for work to create digital trust networks that support at-risk elderly citizens; and Providence, RI, for a program to measure and reduce the “word gap” among low-income children during pivotal brain development years. For more information, visit mayorschallenge.bloomberg.org.