The goals of the City’s Wifi project are:  to attract more customers and visitors to the Downtown Square and to support small businesses and the downtown district.

The City of Georgetown provides free wireless Internet access in the Downtown Square district.   This is a pilot project.  There is no guarantee to the level of access or performance this Wifi system will provide.

Users can log-in using COGwifi for the SSID.   There is no direct support for this Wifi system.   However, users are welcome to send comments or suggestions.

The City strongly recommends that users employ security solutions, such as firewalls and anti-virus software.   It is the user’s responsibility to ensure proper precautions have been taken prior to accessing an open Wifi system.   The City’s Wifi system does not provide any solution for security or protection during use.   Failure to use proper security measures could result in successful hacking of your system, theft and/or illegal use of data.  Privacy of your data and communications cannot be guaranteed while using the City’s Wifi system. 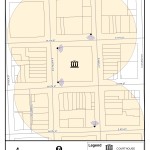 Q:  What areas does the Wifi system cover?

A:  The system was set up to reach most areas of the downtown square.   Due to limitations of wireless technology, coverage might not be available inside some buildings or localized areas.   Please see the coverage map for a visual representation of general coverage.

Q:  This is a pilot project.   What is the future of this Wifi system?

A:  There are no current plans for the future of the Wifi system.   Being a first-of-its-kind service by the City, we will review how the Wifi system has been used and measure its success.

In addition to this service, the City provides free Wifi service to patrons of the City Library, the Recreation Center, the Community Center, and at the Georgetown airport for pilot use only.