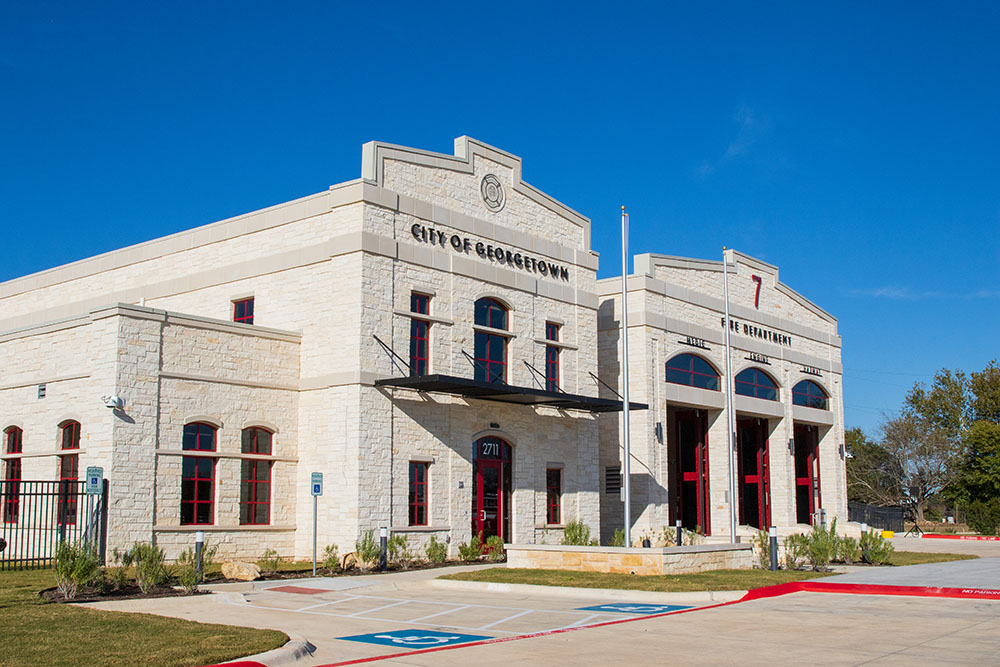 City of Georgetown officials and members of the Georgetown Fire Department gathered at Fire Station 7 yesterday to mark the completion of the new station. Fire Station 7 on the east side of the city will be staffed with an engine company and a medic unit when it opens next spring.

Fire Station 7 has three truck bays with living quarters for 11 and will initially be staffed with a combination of 6 firefighters and medics. The construction cost for the 13,000-square-foot station was $6.3 million. The station was developed in partnership with Emergency Services District 8.

“The completion of Fire Station 7 ensures a high level of fire and medical response as we continue to experience growth in east Georgetown,” said District 7 City Council Member Tommy Gonzalez. “The station is a quality facility that fits in well on University Avenue and supports the men and women of our Fire Department.”

Fire Station 6 on the west side began operating last month with an engine company and a medic unit. It has three truck bays and living quarters for up to 6 personnel, and will initially be staffed with a combination of 4 firefighters and medics. The construction cost for the 12,000-square-foot station was $5.5 million. As with Station 7, a cost-sharing agreement between the City and ESD 8 helps to fund the station.

“These two new fire stations will allow for improved emergency response on the northwest and east sides of our city, which are two of the fastest-growing areas in our town,” said City Manager David Morgan. “We greatly value our partnership with ESD 8 that enables us to make these critical investments to serve our fire and medical response service area.”

The Georgetown Fire/Medical Department encourages homeowners living within five miles of one of the new fire stations to contact the Insurance Service Office for a review of your insurance policy.  To learn more on ISO ratings, go to fire.georgetown.org/iso-ratings.