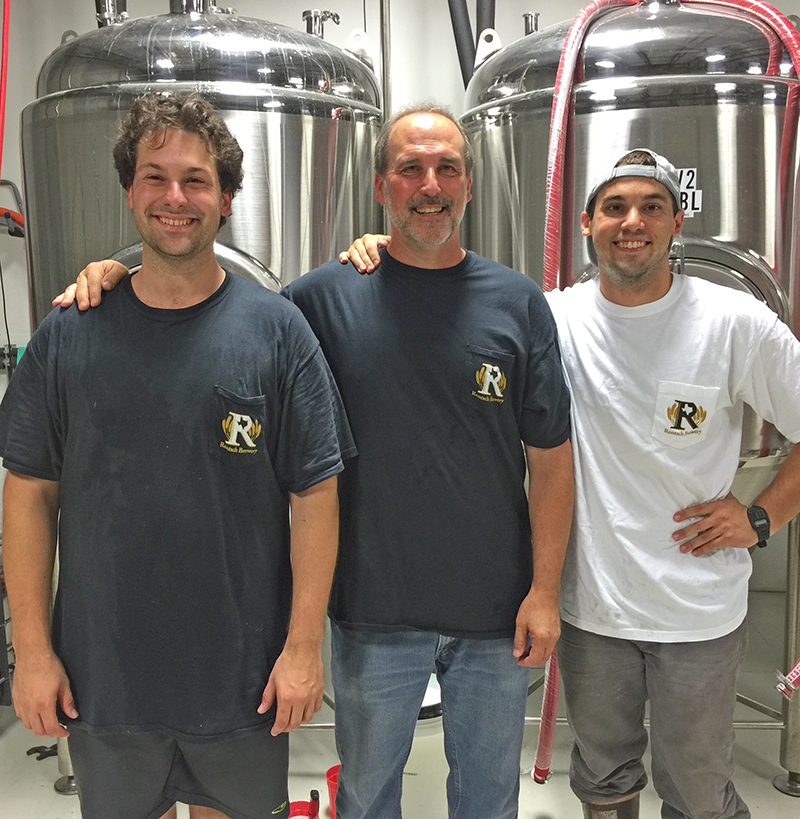 After a year in business, Georgetown’s first brewery can’t keep up with demand and is set for a major expansion. Rentsch Brewery at 2500 NE Inner Loop is planning to triple its building footprint and increase production by ten-fold. In addition, the craft brewery plans to add an outdoor beer garden where patrons can socialize and enjoy entertainment.

Since opening, Rentsch Brewery has sold a variety of beers available by the glass at the brewery or on draft from kegs sold to restaurants. The expansion will include a canning operation that will allow Rentsch beer to be sold in packages in stores. Packaged retail sales will be a significant share of the increased production capacity, which will add 3,750 square feet of production space and 3,500 square feet of warehouse and storage space. (Pictured are Stefano Anianelli, David Rentschler, Andrew Rentschler, founders of Rentsch Brewery.)

Rentsch Brewery was founded by father and son David and Andrew Rentschler, and is family-owned and operated. In selecting equipment for the brewery expansion, the Rentschlers opted for an electric boiler heated by electricity from the City electric utility. This will mean that the brewery will be powered by 100 percent renewable power when Georgetown moves to solar and wind energy next year.

“In May, the U.S. Census Bureau named Georgetown the fastest-growing city in the nation for cities of its size. Apparently the secret is out: Georgetown is a great place to raise a family, start or expand a business or retire” says Georgetown Mayor Dale Ross. “Rentsch Brewery is the latest example of an existing Georgetown business expanding its business operations in the greatest city on planet Earth. I wish David and Andrew Rentschler all the best in expanding their footprint in Georgetown and for them embracing the city’s move to 100 renewable energy.”

As part of the expansion of the brewery, the City Council approved a $70,000 performance agreement from the Georgetown Economic Development Corporation at their meeting last week. Funds will be used for electric and water line upgrades to serve the facility.

“Rentsch Brewery is thankful to the City of Georgetown for being so supportive of our growing business,” says David Rentschler. “We are also thankful for GEDCO’s support, allowing us to become one of a handful of breweries to brew with 100 percent renewable energy. Starting next year, our beers will be made with Texas sun, Texas wind, and Texas water.”

The brewery expansion is expected to be completed by the spring of 2017, according to David Rentschler. He hopes to be selling Rentsch beer in cans in retail locations soon after the expansion is complete.