David Morgan from Richardson was selected by the City Council to serve as the next city manager for the City of Georgetown. Morgan attended the regular meeting this evening at which the City Council cast a unanimous vote to hire him. 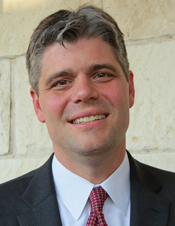 “We ultimately selected David from a strong pool of highly-qualified candidates,” said Mayor Dale Ross. “David is an accomplished professional and dynamic leader who will embrace the community and provide a strong vision as we continue to grow. I am confident he will be a valuable asset to the city.”

Morgan was one of four finalists chosen for the position following an extensive national search including 71 applications from candidates in 25 states. A two-day comprehensive interview process took place on March 13 and 14 including panel interviews with community members, department heads, and City Council members. Strategic Government Resources was hired by the City to conduct the recruitment and interview process.

“I am excited about the opportunity to serve the citizens of Georgetown,” said Morgan. “It is an honor to be selected for this position. Georgetown has a rich heritage and distinguishing character that makes the community a special place. I am committed to preserving Georgetown’s unique identity while also promoting quality development positioning the City for long-term success.”

Morgan has more than 19 years of local government experience and is currently the deputy city manager for the city of Richardson, Texas. He joined the Richardson staff in 1998 as an administrative assistant in the City Manager’s Office. He was promoted to assistant to the city manager in 2000 and was promoted to assistant city manager of community services in 2003. Previously, Morgan worked as a management intern for the city of Lubbock in several departments including the City Manager’s Office.

Morgan, his wife Leticia and two boys are looking forward to making Georgetown their new home. He is expected to begin work in Georgetown on May 4.

Jim Briggs will remain the interim city manager until Morgan’s appointment and will continue to serve as the general manager for utilities and assistant city manager.