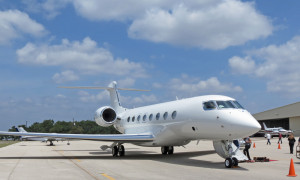 Employees of a Georgetown aerospace parts manufacturer got a rare tour of a luxury corporate jet on Monday where they saw the components they make installed inside a $65 million aircraft.

Employees with Gulfstream flew a G650 business jet from the Gulfstream manufacturing facility in Savannah, Georgia to the Georgetown Municipal Airport. On a taxiway at the Airport, several employees with Enflite in Georgetown got a brief tour inside the jet. (Click on photos to see a larger version.)

Enflite makes subassembly components for sliding doors, tables, and televisions in the plane, as well as equipment in the galley such as ovens and coffee-makers. Enflite supplies interior components to a number of aerospace manufacturers. 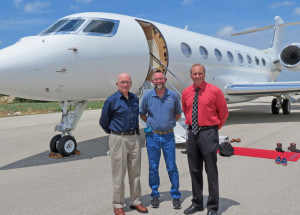 In the photo above (left to right) are Gulfstream pilot John Salamankas, Donny Vance with Enflite, and Interim Airport Manager Curtis Benkendorfer.

The G650 flies at nearly the speed of sound and can cruise at 51,000 feet. It can fly up to 18 passengers from New York to Beijing without stopping for gas.

So who owns one of these planes that retails for $65 million? According to a Bloomberg News article earlier this year, corporate owners of a G650 include Exxon Mobil, Honeywell, Walmart, and Qualcomm. 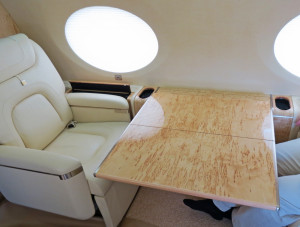 Enflite makes the subassembly components that allow a passenger to press a button to have a table fold into a side pocket. 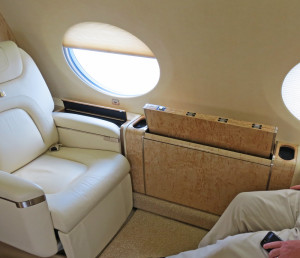 Here the folded table is lowering into the side pocket. 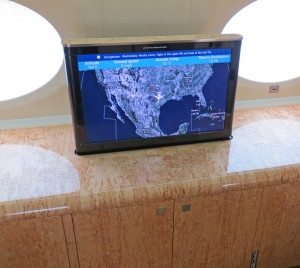 Enflite also makes devices that allow a television to lower into a storage cabinet.