The Georgetown Parks and Recreation Aquatics program won the Agency of the Year Award from the Texas Public Pool Council earlier this month. The award at the council’s annual meeting in San Antonio recognized Georgetown’s aquatics program as the best in the state among cities in the medium-sized category. 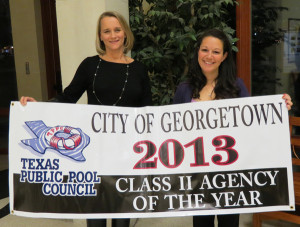 Georgetown Aquatics programs involved more than 2,000 participants in 344 different classes in 2013. Classes include water aerobics, basic swimming lessons, lifeguarding, a junior guard camp, a city swim team, and other American Red Cross classes. Other Aquatics offerings not included in those numbers are daily attendance for open swim and pool use from other groups such as the Aquadillos swim team and the swim teams from Gateway, Georgetown, and East View high schools.

“I have the pleasure of working with a high-achieving, self-driven staff,” says Stephanie Darimont, aquatics coordinator. “The Aquatics staff is dedicated to serving their community and the continuous improvement of their lifeguard skills to keep the Georgetown swimming pools one of the safest places to swim.”

The Junior Guard Safety Camp is an innovative program that teaches pre-teens many aspects of lifeguarding such as swimming, water rescues, first aid, CPR, and patron surveillance. The camp also provides first aid and safety lessons that are valuable skills for pre-teens who are babysitting or taking care of siblings.

The Georgetown Aquatics program also makes swimming recreation available to all residents, regardless of their means. With support from the Friends of Georgetown Parks and Recreation, swimsuits and towels are available to those who need them.