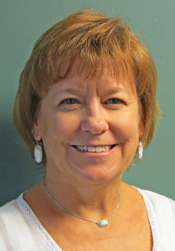 When Micki Rundell was hired as the City’s accounting director in 1993, Georgetown was a little town with a population less than 18,000. Georgetown has more than tripled in size and is now a fast-growing city of 56,000. Along the way at major milestones marking Georgetown’s transition from small town to city, Rundell has been there, helping to navigate the financial route at each key point.

Today she retires, marking her last day working in an office in the basement of City Hall—the former post office on Eighth Street—where she has worked since her first day 22 years ago. During her tenure in the Finance and Administration Division, Rundell was promoted to finance director in 2000 and then chief financial officer in 2010.

Rundell grew up in Temple and then moved to Salado where she went to high school. She later graduated from the University of Mary Hardin-Baylor in Belton with a degree in finance.

When she started with the City of Georgetown Accounting Department in 1993, Rundell used Lotus 1-2-3 to create spreadsheets on a 386 computer, which she recalls was the “super machine” of its day.

The first major project Rundell worked on was in 1993 when Del Webb contacted the City about building the Sun City development in Georgetown. Initially, she said, “We had no clue what we were dealing with.” Rundell says she spent weeks creating financial models to determine the impacts of the project and helped devise a mechanism to pay for the utility infrastructure to serve it. The initial plan for 6,500 housing units seemed hard to imagine at the time, but the projections have proven accurate. Sun City Texas is now among the largest planned retirement communities in the country.

In 2001, the dot com bust combined with a change in direction from the City Council led to one of the biggest challenges in Rundell’s career. Past practice had been to use utility revenue to balance the city budget. But in 2001, the council voted to end “what-it-takes-to-balance” transfers from the utility, creating a $3.5 million shortfall in the budget. Rundell remembers sitting in her office with Jim Briggs from the utilities and Laurie Brewer from accounting where they created nine different options or “scenarios” to address the shortfall. The council chose “Scenario H,” a moniker now infamous in city lore associated with Rundell. Scenario H included a package of cuts and phased tax rate increases that eliminated undefined utility transfers. The result was a disciplined budget that no longer depended on utility transfers, but employed a set 7 percent return on investment to the general fund. The shift that Rundell engineered was a big one, which led to later bond rating upgrades due to the City’s sound financial practices.

Another key turning point was in 2003 when the City negotiated agreements with Simon Property Group for the Wolf Ranch retail center. The shopping center that opened in 2005 has given Georgetown residents a place to buy clothes and household items instead of making trips to Round Rock or Austin. Sales tax revenue from Wolf Ranch has been a major boost to the City budget and helped to keep more retail spending in Georgetown.

Rundell cites two more milestones in her career—the acquisition of the Chisholm Trail Special Utility District and the Rivery Sheraton hotel and conference center project—that will likely been seen in the future as key turning points. Rundell believes that the Chisholm Trail deal that was finalized last year and provides a reliable water provider in Georgetown’s key growth corridors to the northwest, which ensures continued quality growth in that area. The Rivery Sheraton Hotel and conference center will be a major boost to the city’s tourism and event sectors when it opens next year.

Though she didn’t think she’d make it through the first year when she started in 1993, she did, and she says, “It’s been a great ride. It’s been an honor and a privilege to serve this community. I feel truly blessed.”

Rundell plans to stay here in Georgetown after she retires. “This is my home. My friends are here,” she says. Rundell has some home improvement projects in mind and has some ideas for volunteering.

And having made hundreds of presentations to the City Council about budgets and projects over the years, she doesn’t rule out the possibility that she may be back at a future meeting to offer her input—as a citizen.