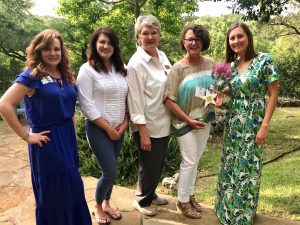 McCalla was the first Main Street Manager in Georgetown, helping to develop the foundation of the program and start the revitalization of downtown in 1982. Since that time, she has been actively involved in further improvements to downtown. She has served on many boards and committees, including the Main Street Advisory Board, Historic Architecture and Review Commission and as past president for Preservation Georgetown. She now serves on the 2030 Comprehensive Plan Steering Committee. She recently completed a restoration project on her downtown property and worked with the Main Street Program, receiving a façade grant to complete the work.

“Linda is a great steward of her own property and as a past HARC commissioner has helped enhance preservation and new construction projects in downtown,” Downtown Development Manager Kim McAuliffe said. “She was one of the first people that reached out to me when I started working in Georgetown, and as soon as we met, I knew she and I would be fast friends. She has been a great resource and supporter.”

Since the establishment of the award in 2014, the Georgetown Main Street Program has recognized seven individuals in downtown Georgetown, including. Lucas Adams, Chet Garner, Rusty Winkstern, Judy and Len Lester, and Beverly and Don Adams.