At the annual meeting of the Texas Library Association last week, Georgetown Public Library Director Eric Lashley was named Librarian of the Year. The annual award is given to a librarian in Texas who has shown extraordinary leadership and service within the library community over the past 12 to 18 months. 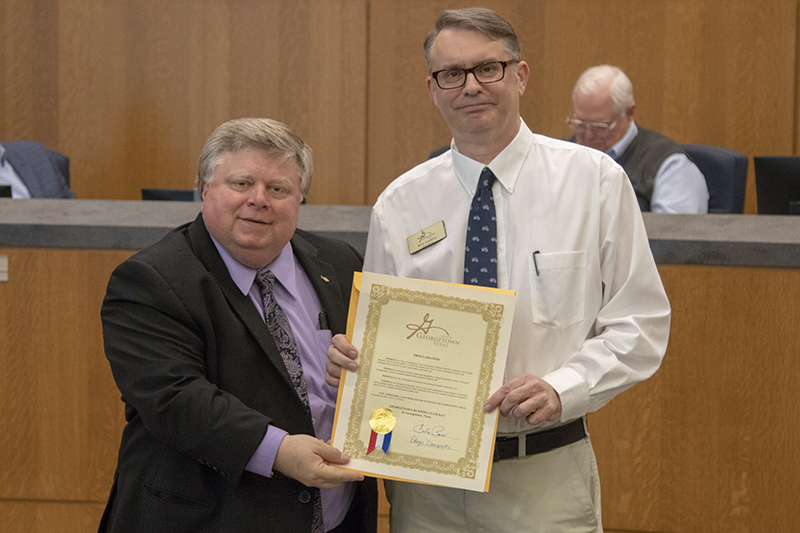 The Librarian of the Year award recognizes that Lashley has implemented “innovative approaches to the technological and existential challenges libraries face and developed a dynamic, beloved public library that is a model for others across the state and the country.”

At the City Council meeting on Tuesday, Mayor Dale Ross honored Lashley with a proclamation and declared that April 23 was Eric Lashley Librarian of the Year Day in Georgetown in recognition of the award.

Lashley has served as the library’s director for 18 years. In that time the community supported a bond election to build a new library that opened in 2007. Current library programs include a film series, storytime for children, teen events, a bookmobile, music concerts, art displays, a social work outreach position, and summer reading performances and events. Lashley also helped to establish the Georgetown Public Library as a Family Place Library offering programs and materials to nurture early learning young children.

In addition to his work at the library, Lashley helped downtown Georgetown to become a state-designated Cultural District, was instrumental in the creation of the Georgetown Art Center near the downtown Square, and has helped to bring outdoor public art to the library and around the Square.