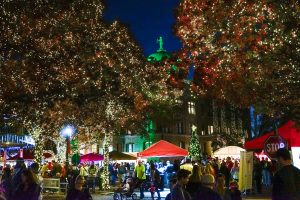 The 38th annual Christmas Stroll is this weekend in downtown Georgetown around the Courthouse Square. This holiday festival sponsored by the Downtown Georgetown Association is 5 to 9 p.m. on Friday, Nov. 30, and 10 a.m. to 8 p.m. on Saturday, Dec. 1. See all the event details at TheGeorgetownSquare.com.

Stroll is a rain or shine event. In the event of severe weather conditions such as lightning or high winds, festival activities will be adjusted as warranted. Check the City social media pages for updates.

The Christmas Stroll on Saturday includes a parade at 10 a.m., live entertainment on two stages, and holiday shopping at more than 150 arts and crafts booths as well as downtown merchants. The Bistro Food Court offers hot chocolate, funnel cake, and other seasonal treats. Enjoy Santa’s Village all day Saturday, including photos and visits with Santa from noon to 8 p.m.

In the Children’s area the young and young at heart can try out the Everest Mountain Climb-N-Slide, street hockey, a children’s train, and Whoo hair salon, as well as other free activities for children.

On Friday night from 5 to 6 p.m. come check out a special Dessert with the Grinch, and a screening of “Shrek the Halls” at 6 p.m. at Main and Sixth streets.

Bethlehem Village features booths, displays, and performers in costume from the time of Jesus of Nazareth.

Admission to Stroll is free. A donation of a new toy to Blue Santa or Brown Santa is appreciated.

The Stroll parade starts at 10 a.m. on Saturday. The Mayor will be in the parade and look for Santa on the firetruck. If you come to the Stroll parade, please bring a toy for Blue Santa. New, unwrapped toys will be collected by Blue Santa Elves along the parade route, which travels along Church Street and Austin Avenue through the downtown Square. Blue Santa is a program of the Georgetown Police Department to provide toys to children in need in Georgetown. New, unwrapped toys also can be brought to donation barrels at many Georgetown locations.

For safety reasons, the Georgetown Police Department asks that no candy or any objects be thrown from floats or participants in the parade. For donation barrel sites and more information, go to BlueSanta.Georgetown.org.

After noon on Saturday, festival-goers may park in the City of Georgetown parking lot on the west side of Austin Avenue at Fifth Street.

Parking is available at the Williamson County parking structure at Third and Rock streets.

The City parking lot at Sixth and Main streets will be closed starting at 6 p.m. on Thursday, Nov. 29, through Saturday. This lot will be used for the food court.

A half-block of Ninth Street will be closed between Main and Founders Park at 6 a.m. Thursday until 1 a.m. Sunday.

Main Street will be closed between Eighth and Ninth streets at 7 p.m. on Thursday until 1 a.m. on Sunday.

Other streets around the Square will be closed starting at 6 a.m. on Friday through 1 a.m. on Sunday. Street closures include Sixth, Seventh, Eighth, and Ninth streets between Austin Avenue and Church Street, and Main Street between Sixth and Ninth streets. Go to TheGeorgetownSquare.com for details.