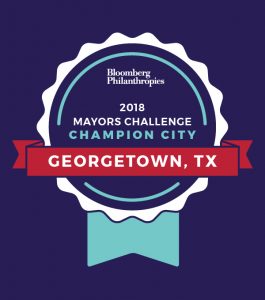 Georgetown is one of 35 Champion Cities selected this week as finalists in the 2018 U.S. Mayors Challenge, a nationwide competition that encourages city leaders to develop innovative ideas that confront challenges facing their cities. Georgetown was selected as a finalist amongst more than 320 applications.

The City now advances to the six-month “Test, Learn, and Adapt” phase of the competition. Cities will refine their ideas during this process with up to $100,000, as well as personalized support from innovation experts, to test and begin building support for their urban innovations and submit a new application in August 2018. In October, four cities will receive $1 million awards and one will receive a grand prize of $5 million to bring their ideas to life.

“We received hundreds of bold and creative ideas from cities around the country in response to the 2018 Mayors Challenge, and these 35 really stood out for their potential to improve people’s lives. The next six months are a great opportunity for the cities to test their ideas and make them even more innovative and effective,” said Michael R. Bloomberg, founder of Bloomberg Philanthropies and three-term Mayor of New York City.

Georgetown’s innovative idea involves developing the “virtual power plant.” While Georgetown is the first and largest city in Texas to secure 100 percent of its purchased power from renewable sources, there are cost uncertainty and reliability concerns related to transporting that energy over long distances. The City of Georgetown hopes to be able to lease rooftop space on residential and commercial properties to install solar panels that will generate enough energy to offset the need to purchase power from outside sources in this completely renewable energy-powered city.

“The City executed purchased power agreements to cover Georgetown’s energy usage with 100 percent renewable energy, making Georgetown one of the largest city-owned utilities to do so,” Georgetown Mayor Dale Ross said. “The media coverage that followed this announcement was seen by more than two billion people. I welcome this opportunity to blaze the next renewable energy trail.”