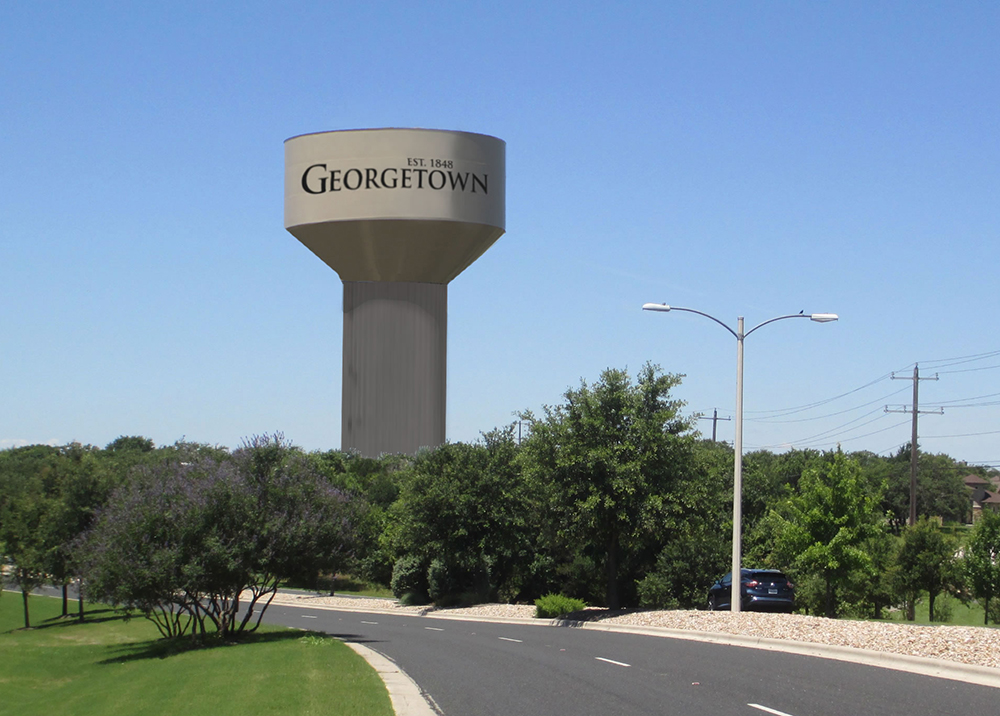 This month the City of Georgetown will begin construction on a new elevated water storage tank, commonly known as a water tower, in Sun City. The new 2 million gallon water tank will be built next to the existing tank that is located adjacent to Sun City Boulevard about 500 feet north of Texas Drive. (A rendering of the new tank is pictured.)

The existing 400,000 gallon water tank was built in 1995 when Sun City was expected to contain 6,500 homes. However, Sun City is now expected to have more than 10,500 homes at final build-out. A larger tank is needed to support the demand from the homes in Sun City and the surrounding area.

The new tank will help regulate and maintain a more consistent water pressure throughout most of Sun City as a result of less fluctuation in the tank’s water level.

The new storage tank will be very similar in design and appearance to the elevated water tank that was recently constructed on D.B. Woods Road at Cedar Breaks Road. It will have a capacity of 2 million gallons and be the same height as the existing tank, which is 165 feet tall. The pedestal section of the tank will be made of steel-reinforced concrete and the bowl section will be fabricated from steel. The new water tank will cost $3.2 million, funded by water utility revenues. Construction is expected to take up to 400 days.

The new water storage tank was designed by Dunham Engineering and will be constructed by CB&I. The contract to construct the tank was a competitive bid approved by the City Council in September. CB&I has constructed more than 400 similar tanks and a total of more than 25,000 elevated water tanks in the company’s 123-year history.

The existing tank will remain in service until the new tank is completed. Shortly after, the existing steel tank will be removed in sections and lowered to the ground via a separate contract.

Construction on the new water storage tank is expected to start in the next two weeks and be completed by early 2019. Construction hours will be limited to Monday through Friday from 8 a.m. to 6 p.m. There will be a few times during the construction process when hours will extend beyond those times, such as during the concrete pouring process for the pedestal.