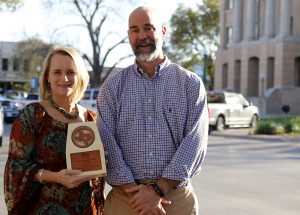 The City of Georgetown Parks and Recreation Department was awarded the Gold Medal Award for cities with populations between 50,001 and 100,000 from the Texas Recreation and Park Society.

The award, which honors departments for excellence in recreation and park management, was presented at the 2017 TRAPS Institute and Expo Annual Awards dinner on March 2 at the Irving Convention Center at Las Colinas.

From 2014 through 2016, the City completed and continued renovations to the Williams Drive Pool, San Jose Splash Pad and San Gabriel Park. In addition, the department received a $5 million donation to develop Garey Park on 525 acres of donated park land. City Council has also committed to funding maintenance and operations for the new park.

“Winning the Gold Medal is a great honor not only for our department but for the City of Georgetown,” said Kimberly Garrett, Georgetown Parks and Recreation director. “The facilities and programs we provide the community rank the best in the state. Our Parks and Recreation Department could not be so successful without the support of our City leaders.”

Garrett accepted the award at the annual awards ceremony.

TRAPS is an educational and professional organization for parks, recreation and leisure services in Texas with approximately 2,000 members.