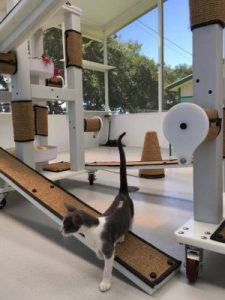 Cats in Georgetown are purring their pleasure at their new digs.  The City of Georgetown Animal Shelter is having a ribbon-cutting on Saturday, October 29, to celebrate the opening of the Judith Shirven Catio, a newly constructed screened porch for cats.  The ribbon-cutting by Mayor Dale Ross will be at 1:00 p.m. at the Animal Shelter, with tours and cake offered from 12:00 to 2:00 p.m.

Shirven was an early supporter of and volunteer for the Friends of the Georgetown Animal Shelter, which formed in 2010 to raise funds for the City animal shelter.  Shirven moved to Georgetown in 1999 after living for many years in New Jersey, New York, and Massachusetts.  A weaver and crafter, she was also an advocate for animals and left a portion of her estate to the Friends of the Georgetown Animal Shelter to be used for cats.  She died in 2013, leaving behind two daughters and other family.

The Shirven Catio greatly enhances the lives of cats at the shelter by giving them time outdoors in a safe environment, reducing stress and the potential for illness, and giving them mental and physical stimulation. In addition to the construction of the catio, the $75,000 estate gift allowed for the purchase of elaborate cat furniture – specially designed for cats’ needs and ease of cleaning – as well as glass walls for the cat community rooms and air purifiers.

The Animal Shelter, which is an open admission municipal shelter, recently achieved no-kill status for the second fiscal year in a row, with a save rate of 93.5 percent.  Notably, the shelter returned as many dogs to their owners as they adopted out last year.

The City of Georgetown Animal Shelter is located at 110 W.L. Walden Drive near the McMaster Athletic Fields. Contact the shelter at (512) 930-3592 or by email at animalsvc@georgetown.org or online at pets.georgetown.org.