The 17th annual Red Poppy Festival on the downtown Square in Georgetown is this weekend on April 22 – 24. The biggest annual festival on the Most Beautiful Town Square in Texas starts on Friday night with three days of music, entertainment, and family fun. 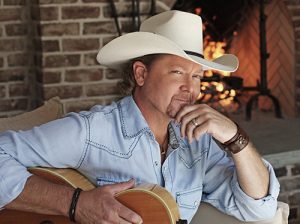 Tracy Lawrence is the headliner at the Saturday night street dance and Kimberly Dunn starts the concert on Saturday night. The Friday night concert features Dysfunkshun Junkshun. There is no admission charge for the concerts or other festival activities such as the car show, parade, children’s area, or vendor booths. Bring your own chair if you are coming to listen to the music.

The Red Poppy Kid’s Fun Zone is open 10 a.m. to 7 p.m. on Saturday and 11 a.m. to 4 p.m. on Sunday. The Fun Zone includes an obstacle course, a huge slide, a bounce house, a basketball game and a toddler playground.

The Red Poppy Festival is on track to become a Zero Waste event by 2021, which means that 90 percent of the waste from the event is recycled or composted. Food vendors are using only compostable plates, dishes, drinking straws, napkins, and cutlery and recyclable cups. Look for recycling and composting eco-stations and help the festival to become Zero Waste. You can start by bringing your own reusable shopping bags from home.

Winners of the Red Poppy Taste Awards, a cooking competition featuring foods with poppy seeds will be announced on stage during the Saturday night concert.

The official 2016 Red Poppy Festival poster is on sale for $5 each at the Visitor Center at 103 W. Seventh Street. T-shirts are available at the festival.

Where are the poppies? For a map showing the locations of red poppies in Georgetown, stop by the Visitors Center at 103 W. Seventh Street. (Or see an online map at poppy.georgetown.org/things-to-do/red-poppy-tour.)

Other streets around the Courthouse Square will close at 6 a.m. on Friday, April 22 to allow for vendor set-up. Streets around the Square will remain closed through Sunday at 11 p.m. An expanded street closure area will be in effect on Saturday from 6 a.m. to 12 p.m. (noon) for the Red Poppy Parade. To see the parade route, go to poppy.georgetown.org/things-to-do/parade. Detailed street closure information can be found at poppy.georgetown.org/about.

A free shuttle will run on Saturday, April 23 from 9 a.m. to midnight. The shuttle will pick up and drop off passengers at the First Baptist Church located at 1333 W. University Avenue. The drop-off location is at the corner of Austin Avenue and Ninth Street.

The City parking lot at Sixth and Main streets will be closed starting at 6 a.m. on Friday, April 22.