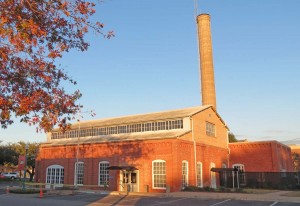 The City of Georgetown Planning Department is moving to the historic Light and Water Works building at the corner of Eighth and MLK Jr. streets. The red brick building with the smoke stack that was built in 1911 was most recently home to the police department for 30 years. The Economic Development Department and some smaller departments moved to the building in November.

The Planning Department entrance is on the east side of the building addressed as 406 W. Eighth Street. The Planning Department will be closed December 30 – 31 and will open in the new location on January 4. The Permitting and Inspections Department is not moving, but will remain at 300-1 Industrial Avenue at the Georgetown Municipal Complex.

The Economic Development Department moved to the Light and Water Works building November 18 – 19. The department uses the west entrance to the building addressed as 809 MLK, Jr. Street. The Main Street Program, Housing Department, and Public Communications Department also moved to the new building in November.

The historic Light and Water Works building is part of the city building renovation project known as Downtown West. The project also includes converting the former library at 808 MLK, Jr. Street to a new City Hall and renovating the Communications and Technology Building at 510 W. Ninth Street to become the new Municipal Court and Council Chamber.

A programming plan for Downtown West, which determines uses that could fit in the buildings, was presented to the City Council on November 24 and adopted at the December 8 meeting. According to the programming plan, the two-story section of the Light and Water Works building would become open space with the interior second floor removed. This change would be part of a future phase of work not expected to begin until 2017 or later.

Design of the new City Hall and new Municipal Court and Council Chamber is scheduled for the first half of 2016 with construction to begin in the fall of 2016.

A new 144-space public parking lot on MLK, Jr. Street at Eighth Street is nearly complete and will open soon.