Millions of fans across the world will be watching the U.S. Grand Prix Formula One race at the Circuit of the Americas course in Austin this weekend. Driver Valtteri Bottas, a Finnish 26-year old on the Williams Martini Racing team, is currently fifth in the Formula 1 standings. 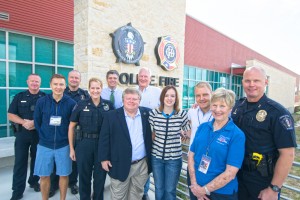 Before the big race day on Sunday, Bottas came to Georgetown where he tested his skills on a driving track for training police officers.

Bottas was invited to Georgetown several weeks ago by Karen Gilbert, a volunteer at the Georgetown Police Department and a huge fan of Formula 1. Gilbert contacted Bottas through a fan website and was surprised when he agreed to come.

“I invited him to come and play cop for a day,” says Gilbert, who mentioned the tactical training building and the driving track at the Public Safety Operations and Training Center.

Bottas arrived in Georgetown Tuesday morning where he was greeted by police officers and City officials. Then Sgt. Wyatt Raley put Bottas through his paces in training exercises at the tactical building. 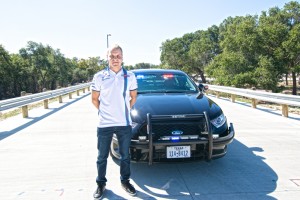 Bottas also tested his skills driving a police patrol vehicle on the driving track. After a test run with Officer Casey Horsley, Bottas drove the course with sharp turns and obstacles and set a new course record of 1 minute and 36 seconds.

A crew with Off the Grid, an NBCSN TV show about Formula 1, filmed Bottas’ visit to Georgetown and his run on the driving track. The segment will be part of an Off the Grid show about the Austin Formula 1 race that will air on NBCSN on November 11.

Captain Evelyn McLean with the Police Department said one of the goals in inviting Valtteri Bottas to meet with officers at the facility was to give him a picture of what it’s like to be a police officer. Bottas told McLean that spending the day with police officers gave him a new perspective on the job they do. “Like driving in a Formula 1 race, we have to make decisions in a split second and make those decisions accurately,” says McLean. 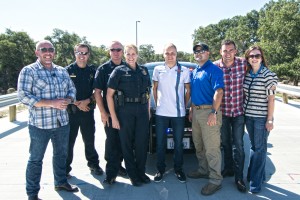 Bottas is back in Austin and preparing for the practice sessions at Circuit of the Americas on Friday and a qualifying session on Saturday.

When Bottas races at 2 p.m. on Sunday, he is likely to have some new fans in blue from Georgetown cheering him on.