The City of Georgetown will hold a grand opening for the new Public Safety Operations and Training Center on Friday, July 10. A ceremony and ribbon cutting event with Mayor Dale Ross starts at 2:30 p.m. A come-and-go open house will be held the next day on Saturday, July 11 from 9 a.m. to 4:00 p.m. Both events are open to the public. 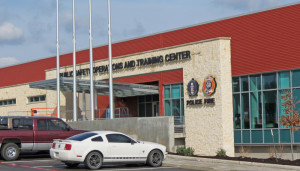 The Georgetown Police Department and Georgetown Fire Department Administration moved into the new center on February 2. The facility is located at 3500 DB Wood Road next to Fire Station 5.

Training elements of the facility include a 17,000 square-foot tactical building with classrooms and reality-based training bay, as well as a slow-speed driving track.

Energy-efficiency features of the center include outdoor LED lights, energy-efficient indoor lights fixtures, and room occupancy sensors, as well as windows, skylights, and light wells that allow natural lighting to reach both floors.

Landscaping includes native and drought tolerant plants to reduce water use. Vegetated drainage areas allow storm water to be absorbed rather than running off the site.

The architectural design team for the center included Architects Design Group and KAH Architecture. Bartlett Cocke General Contractors was the construction contractor for the $29.3 million facility.

The new center replaces the former main police department building at 809 Martin Luther King, Jr. Street. That 1910 historic Light and Waterworks building will be repurposed as one component of the Downtown West campus, currently under development.

Map to the Public Safety Operations and Training Center: