City of Georgetown Texas > Arts & Culture > Bluegrass & Country Live at the Library for Father’s Day
May 21, 2015 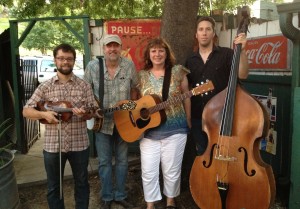 Bluegrass and country musicians The Sieker Band will appear next in the Georgetown Public Library’s popular “Live Music at the Library” series. They will perform on Sunday, June 21, at 2 p.m. in the library lobby, performing a special Father’s Day concert.

The Sieker Band maintains a busy performing schedule, including playing at the Kerrville Folk Festival in May.

Rolf & Beate Sieker started their professional music career in Berlin, Germany. They played many concerts in Germany, toured throughout Europe, appeared on television and radio, and recorded five albums, two in Nashville and three in Berlin. In 1997 they moved to Nashville and since 2000 they have lived near Austin, live music capital of the world.

Beate Sieker plays acoustic guitar and occasionally upright bass. Her vocals have become the trademark of The Sieker Band, generating a lot of fans. Influenced by Texas singer/songwriters, her repertoire consists of songs written by Bill & Bonnie Hearne, Steven Fromholtz, Willie Nelson, Steve Gillette, Karla Bonhoff, Ian Tyson, Townes Van Zandt, Bill Monroe and many others. Beate is one of the finest rhythm guitar players around.

Free and open to the public, this performance is a gift of the Friends of the Georgetown Public Library. Come and go, or have a seat in the library lobby and enjoy the concert. Come enjoy a Father’s Day concert with us!