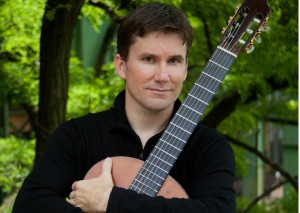 Classical guitarist Peter Fletcher plays next in the Georgetown Public Library’s popular “Live Music at the Library” series. He will perform on Sunday, May 17, at 2 p.m. in the library lobby.

This concert is part of a nationwide tour to promote Fletcher’s new Edvard Grieg CD, released in 2014 on Centaur Records.

Fletcher will perform selections from this new CD, an all-Grieg album for which he wrote the guitar transcriptions. CDs will be available at the concert. He performed this same concert at Carnegie Hall in April.

Other works on the program will include Bach’s Jesu, Joy of Man’s Desiring, Courante from the Third Cello Suite, and Prelude in C minor and Fugue in G minor, BWV 999 and 1000.

In addition he will perform a very special version of the traditional Shaker Hymn Simple Gifts, transcribed by John and B.J. Sutherland. The last half of this guitar setting modulates down a step to C major. To accommodate this key change, the bass string of the instrument must be tuned down one whole step in performance, producing a sound reminiscent of a country fiddler.

The final work on the program will feature Fletcher’s transcription of Paganini’s dazzling Caprice no. 24.

Free and open to the public, this performance is a gift of the Friends of the Georgetown Public Library. Peter Fletcher’s tour is conducted under the auspices of Phillip Truckenbrod Concert Artists. Come and go, or have a seat in the library lobby and enjoy the concert. For more information, contact Dana Hendrix, GPL Fine Arts Librarian, at (512) 930-3624.