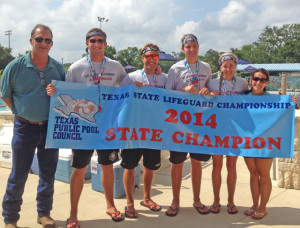 Team Dauntless from Georgetown took first place in the competition. Pictured above in the photo (left to right) are Curtis Morgan with TAAF and members of Team Dauntless including Trevor Carey, Cameron Speegle, Hunter Boyd, and Baylee Hill with Stephanie Darimont, aquatic coordinator for Georgetown Parks and Recreation. Team Dauntless qualified for the state finals after placing first at the Texas Superguard regional competition in July. 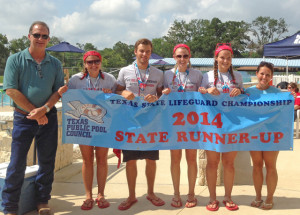 Placing in second at the state competition was Team ReGuardless from Georgetown. Pictured above in the photo (left to right) are Curtis Morgan and members the ReGuardless team Saige Culbertson, Mason Sheppard, Sydney Sorensen, and Kate Krause with Stephanie Darimont.

A third team from Georgetown that qualified for the state competition and participated in the finals was Team Four Bravery, including Bailey Vandegrift, Emily Sargeant, Jack McLean, and Trevor Springer.

The three Georgetown lifeguard teams were composed of lifeguards who work for the City of Georgetown in the Parks and Recreation Department at the City’s outdoor and indoor pools.