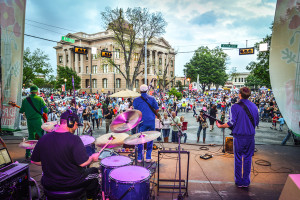 “San Marcos, Cedar Park and Georgetown—each near Austin—ranked among the 10 fastest-growing cities with populations of 50,000 or more during the year ending July 1, 2013,” according to the Census news release.

Housing starts have continued at a steady pace in Georgetown with 690 new home permits issued in 2013.

Growth in Georgetown shows no signs of slowing down. Housing communities in all areas of the city continue to add new residences, including developments such as Water Oak, Sun City Texas, The Brownstone at the Summit, and La Conterra. Other neighborhoods such as Wolf Ranch—a Hillwood Communities development with more than 2,000 residences—are in the planning stages.

Why is Georgetown growing so fast?

One reason is Georgetown’s location in the Austin metropolitan area, which has been the fastest-growing metro region in the nation for the past four years. The Austin metro continues to add jobs as well as retirees at a rapid pace.

Other reasons for Georgetown’s growth include the historic downtown area and Courthouse Square, parks and trails, dining and entertainment options, good schools, safe neighborhoods, and one of the lowest property tax rates in Texas.

Click here to find out more about moving to or living in Georgetown.