City of Georgetown Texas > Archived > Landscape and Irrigation Rules for New Homes to Save Water
Apr 22, 2014

Update: The City Council approved the landscaping and irrigation ordinance 7-0 on second and final reading at their meeting this evening. It goes into effect for new homes on June 1.
—
Despite the fact that Lake Georgetown is 14 feet below the full level at a time of year when it is typically full, the overall water supply picture for Georgetown is not dire. The water in Lake Georgetown, Lake Stillhouse Hollow, and the available groundwater can meet the projected demand for Georgetown in the coming years. 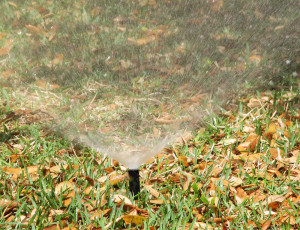 However, with water use at an average of 218 gallons per person per day in Georgetown, the water supply is not sufficient for a projected future population of 200,000. To accommodate this growth, the water supply will need to be increased or demand must be reduced. Given the cost and challenges of acquiring new sources of water, the City is emphasizing measures to conserve the existing water supply.

With a proposed ordinance that the City Council will consider this evening, the City aims to move closer to the goal of lowering the per capita daily water use to 160 gallons. Given that 75 percent of water use in the warmest summer months is used for watering lawns, the ordinance focuses on limiting future grass watering demand for new homes. The rules do not apply to current homes or residences.

First, the irrigated turf area of the lawn would be limited to 2.5 times the foundation footprint area of the house or 10,000 square feet, whichever is less. The limit does not apply to non-irrigated space such as natural areas or landscaped areas such as flower beds that are irrigated with drip irrigation or bubblers. The limitation does not affect the overall size of a residential yard.

Second, when a lot is developed, the irrigated turf area would be required to have 6 inches of soil. The depth of the soil allows for less frequent watering of turf grass and reduces runoff. Areas of a residential lot left in its natural state would be exempt from the soil depth requirement.

Third, turf grass should be a variety that is dormant in the hot summer months and has less need for water. Turf grasses such as Saint Augustine that require more water would only be used in shady areas of a lawn.

Other elements of the ordinance include requirements for rain sensors and soil moisture sensors on irrigations systems and the placement of irrigation spray heads at least four inches from paved surfaces to reduce overspray.

The new rules will apply to new houses served by the City of Georgetown water utility including those in the city limits, in the city’s extraterritorial jurisdiction, and outside the ETJ.

The ordinance is part of an effort to meet a May 1 deadline to submit a water conservation plan to the Texas Water Development Board and the Texas Commission on Environmental Quality.

If the Georgetown City Council approves the second and final reading of the landscaping and irrigation ordinance on Tuesday, the council will set an effective date. The meeting starts at 6 p.m. on Tuesday at the Council Chamber and Courts Building, 101 E. Seventh Street.