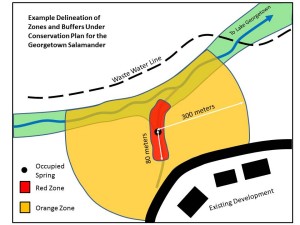 The designation of zones that would protect water quality around springs and streams that are Georgetown salamander habitat will be considered by the Georgetown City Council December 10. The ordinance would apply to areas in the Edwards Aquifer recharge zone in the Georgetown city limits and extraterritorial jurisdiction, which extends up to 3.5 miles beyond city limits. (Click on graphics to see a larger version.)

The proposed rules were developed by Williamson County and the City of Georgetown as a result of the potential listing of the Georgetown salamander as an endangered species by the U.S. Fish and Wildlife Service. If the ordinance is adopted, Fish and Wildlife may decide not to list the salamander as endangered. The ordinance would protect certain springs and stream areas that are identified as salamander habitat from certain kinds of activities.

A total of 14 red zone sites in the Georgetown city limits and ETJ have been identified. Eight of these sites are on City parkland or U.S. Army Corps of Engineers property around Lake Georgetown. Six sites are on private property. 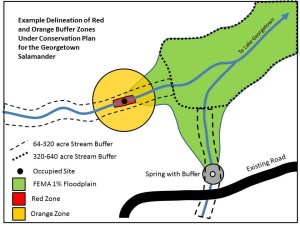 Another element of the proposed ordinance would establish a management committee to review environmental data on a regular basis, make policy recommendations, and make recommendations to the City Council regarding requests for variances from development guidelines. The proposed management committee would include City of Georgetown appointees and representatives from Texas Parks and Wildlife Department, U.S. Fish and Wildlife Service, the Georgetown development community, and the Williamson County Conservation Foundation.

The City Council will consider the first reading of the proposed ordinance at their regular meeting on Tuesday, December 10. The meeting starts at 6 p.m. in the Council Chambers and Courts Building at 101 E. Seventh Street.